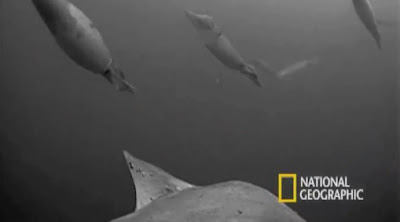 
Humboldt squid (Dosidicus gigas) — which can grow to more than 6 feet (2 meters) in length and 100 pounds (45 kilograms) in weight — have razor-sharp beaks and toothed suckers. Mass strandings of the species and reports of aggression toward humans have spooked beachgoers for decades, but the jumbo squid are not man-eaters — they usually feed on small fish and plankton that are no more than a few inches in length, though they sometimes cannibalize each other. . . . 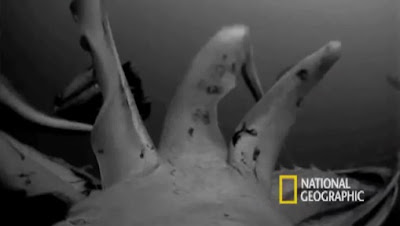 The squid can swim at 45 mph (72 kph) for short bursts, as fast as the fastest  fish, and they hunt in well-coordinated packs. They also may talk to each by changing colors:


Jumbo squid are known to have pigmented cells, called chromatophores, which allow them to change color in response to neural impulses. The cameras allowed the researchers to watch the squid flashing like a strobe light in their natural habitat. . . the only time the squid seem to make these red-and-white color signals is when they encounter another individual of their species.