Understanding Europa by Analogy to Antarctica 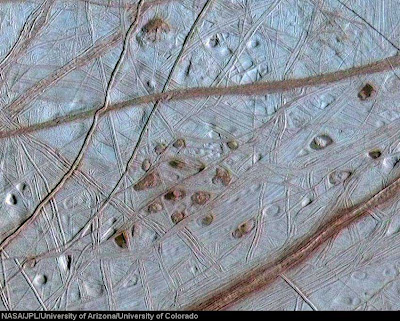 A new paper in Nature tries to explain the fractured "chaos terrain" of Jupiter's moon Europa by analogy to glaciers in Greenland and Antarctica. Scientists think that Europa has a world-spanning ocean of liquid water, sealed under a thick crust of ice. The surface is not smooth, though, but broken into millions of pieces that seem to be jostling against each other. The new theory is that the fractured surface is caused by lakes of liquid water that rise to within a few kilometers of the surface and spawn what amount to icebergs. 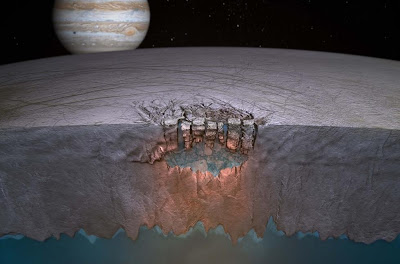 On earth, such rising lakes of warm water are caused by volcanoes under the ice. Something similar may happen on Europa:

Here we report an analysis of archival data from Europa, guided by processes observed within Earth's subglacial volcanoes and ice shelves. The data suggest that chaos terrains form above liquid water lenses perched within the ice shell as shallow as 3 kilometres. Our results suggest that ice–water interactions and freeze-out give rise to the diverse morphologies and topography of chaos terrains. The sunken topography of Thera Macula indicates that Europa is actively resurfacing over a lens comparable in volume to the Great Lakes in North America.

This is getting a lot of attention because life would be more likely in that sealed ocean if there were a way for it to make contact with space. The solar system is full of simple organic molecules, especially around Jupiter, and they must rain down on Europa's surface. If they could get into the comparatively warm ocean, they would promote life. The new theory proposes a mechanism whereby the surface of Europa would slowly be recycled, and anything falling on the surface would eventually be incorporated into the ocean below. 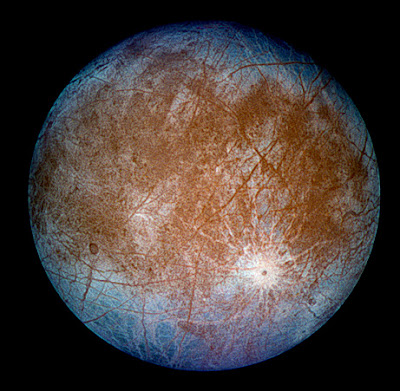 hopefully if (or possibly when) we send a probe to europa, we take into account the sticky issue of *bringing* life to europa in the form of microbes. studies have repeatedly revealed the astounding capabilities of various bacteria to survive not just minutes, but years in space.

one study shows a 553-day life of beer bacteria in space. granted, the trip to jupiter is a bit longer than 553 days, but the concern remains that we could at least taint our own measurements, and possibly taint the ecosystems we intend to sample. just because it's distant doesn't mean it isn't fragile. in a word, i want to be certain when i'm stoked that we've found extraterrestrials.

Yes, I worry about this, too. It seems likely to me that any Europan life would be well enough adapted to its own world to fend off life from earth, but what if earth bacteria are tougher? That would be a tragedy.