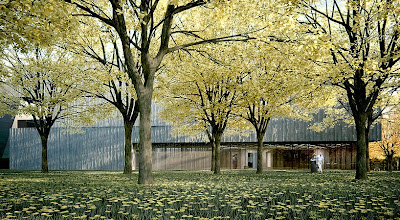 Clyfford Still, one of the giants of 20th-century American painting, died in 1980 leaving an unusual will. This document stipulated that his entire estate be given to an American city willing to establish a museum dedicated to his work. In 2004, the Still estate selected Denver as that city and a deal was made. According to the museum's web site, this deal made them custodians of 2,400 works by the artist. I assume that includes lots of unfinished sketches and the other sorts of bric-a-brac artists leave behind, but also numerous paintings. The museum has a pretty nice building (above), designed by Brad Cloepfil. 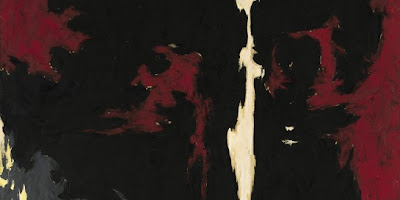 The city and the estate both put up money for building and endowing the museum, but as usually happens, the costs escalated and there wasn't enough cash. So the museum's board decided to sell four paintings -- that's FOUR of the 2,400 works they own -- to raise money. The paintings were auctioned at Christie's this week and brought in a total of $114 million, $50 million more than the estimate. Above is 1949-A-No. 1, which sent a record for a Still work at $61,682,500. 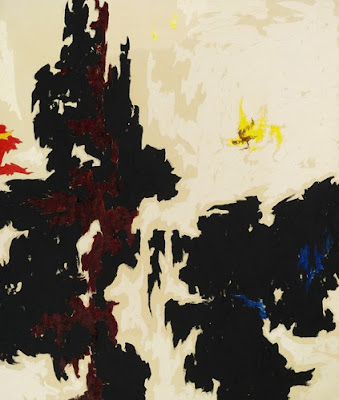 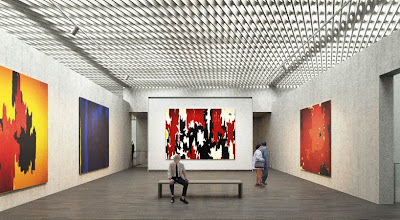 These are nowhere near the best or most famous paintings by Still -- neither one is shown in any of the art books I have on hand, which do show half a dozen other works of his. (You can see two more famous works in this picture of the central gallery at the new museum.) The man's total output must be worth more than the GDP of most African countries. Which I suppose justifies, in a way, the monumental ego of a man whose dying wish was to endow a museum devoted to his own career. 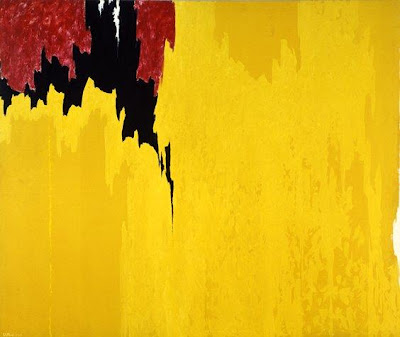 There has been a lot of criticism of this sale, as there always is when museums sell works from their collections. I think more museums should sell stuff. Your average art museum only has wall space to display 1 to 5 percent of the works in its collection, and the art world as a whole would be better off if more of those works were dispersed to places that would actually display them. Above is my favorite Still work, an untitled canvas from 1957.