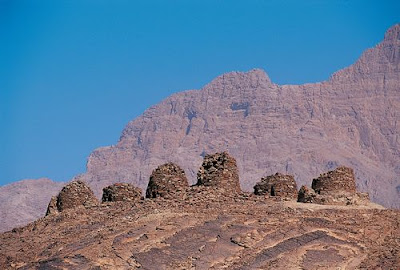 Perusing a list of UNESCO World Heritage Sites, I stumbled across The Archaeological Sites of Bat, Al-Khutm, and Al-Ayn, an archaeological district in Oman. Bat is an oasis town in the interior of the country, and Al-Khutm and Al-Ayn are nearby sites notable for their impressive beehive tombs. The Bronze Age culture of this region is called Umm an-Nar, after a site in Abu Dhabi. Those are the tombs of Al-Ayn above. 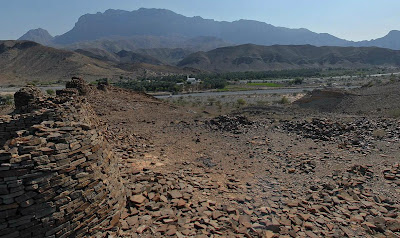 The view of Bat from Al-Ayn; click to enlarge. 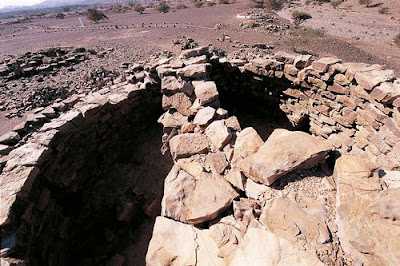 In the settlement of Bat, excavations uncovered numerous small, rectangular houses and several larger, round, fortified houses that might once have been towers. The site dates to 2600 to 2200 BC. Civilization developed in this area because of trade with Mesopotamia, especially in copper, which is common in the area. 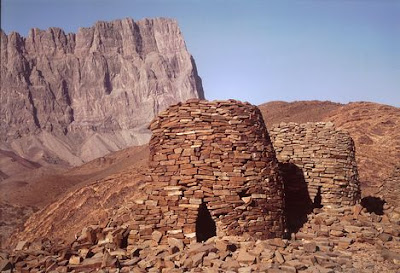 These settlements in Oman were probably the land refered to in Sumerian texts as Magan:

In the 1950s Danish archaeologists excavating grave mounds in Bahrain, northwest of Oman, found 4,200-year-old settlements and temples of the city-state of Dilmun, known as the city of the gods in ancient Sumerian literature. Their 1959 discovery on the island of Umm an-Nar off Abu Dhabi of a second, previously unknown culture contemporary with Dilmun was unexpected. At the site an outer wall enclosed circular graves, 15 to 40 feet in diameter and often two stories high, in which as many as 30 people were buried. Spurred on by the discoveries at Dilmun and Umm an-Nar, Danish archaeologists excavated 200 single-chambered burial cairns in 1961 near Jabal Hafit on the Oman-United Arab Emirates border. There they discovered a culture earlier than that of Dilmun or Umm an-Nar. Excavation yielded jars with geometric designs painted in black, white, and plum red; copper and bronze pins; and stone and faience beads. The jars were the same type as those used in southern Mesopotamia around 3000 B.C. Unfortunately there is little trace of the ancient settlements associated with these tombs.

Was Oman the land of Magan, which appears in Sumerian cuneiform texts ca. 2300 B.C. as a source of copper and diorite for the flourishing city-states of Mesopotamia? These texts tell us that ships with a cargo capacity of 20 tons sailed up the Arabian Gulf, stopping at Dilmun to take on fresh water before continuing to Mesopotamia. They also say that Magan lay south of Sumer and Dilmun, was frequented by Indus Valley travelers, and had high mountains from which diorite or gabbro for black statues was quarried. Research since the 1970s has located significant copper deposits and more than 150 medieval Islamic smelting sites. Excavations by the German Mining Museum have identified numerous Magan-period (2500-2000 B.C.) slag heaps under tons of medieval slag and third millennium remains from mining and smelting at the oasis village of Maysar in central-eastern Oman. A hoard of bun-shaped copper ingots found in a small fireplace indicates the form in which copper was traded. 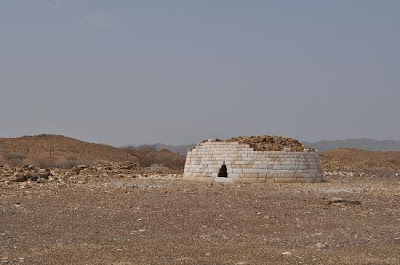