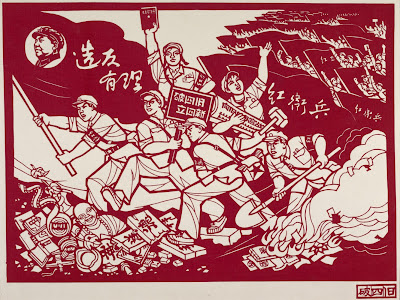 This Chinese poster, dating to the early days of the Cultural Revolution, was recently discovered in a storeroom at the University of Michigan. It was made by papercutting, probably in southern China, far from Mao's direct control. It represents a campaign launched by Mao and his then second-in-command, Lin Biao, in 1966, to "Eliminate the Four Olds": Old Customs, Old Culture, Old Habits, Old Ideas. It was during this campaign that brigades of Chinese students smashed thousands of ancient monasteries, tombs, and other cultural monuments. Such posters are rare even in China, because events moved so quickly during the Cultural Revolution. Campaigns were soon replaced by other campaigns, and to have out of date posters hanging around was to invite suspicion, not to mention that most people were too worried about survival to save mementos of the age. 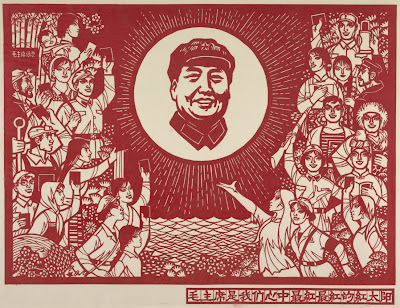 Another from the same cache, Chairman Mao is the Red Sun in Our Hearts. Note the Little Red Books.
Posted by John at 9:23 PM