The "Amazonian Desert," or, the Adaptive Power of Culture 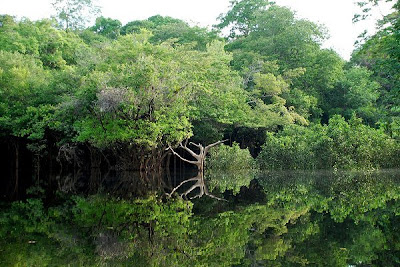 I am reading a book, which I will post about later, that includes some history of the European exploration of the Amazon. Explorers in the nineteenth and early twentieth centuries had terrible trouble finding food in the rain forest, and many of them starved. Though they were expert hunters, they could find no game or even birds to shoot, and no fruit. When they weren't starving, they were dying of diseases and suffering bizarre agonies from the many hideous parasites that we still like to talk about when we want to gross each other out. Sometimes they suffered from thirst in regions that get 200 inches of rain a year. They called the rain forest a "counterfeit paradise," an environment that looked rich but was really incapable of supporting human life. Some went so far as to claim that the Amazon was a desert as harsh as the Sahara. 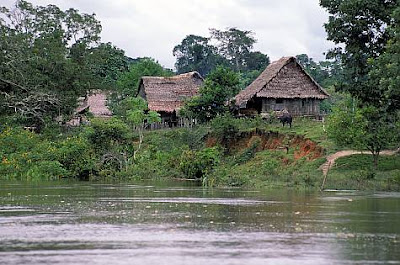 Those early explorers mostly visited lands along the great rivers, or close to European settlements, districts where the native Indian tribes had been destroyed by disease, slave raiding, and the rubber trade. When the explorers got away from the blighted regions, they found tribes with thriving populations, large villages, and store houses full of food. The Indians showed the explorers how they could summon many birds and mammals by imitating their calls, stun fish with herbal poisons, gather hidden fruit, find water in giant leaves, raise crops on land Europeans thought unfarmable, and otherwise feed themselves very well in forests where European explorers perished from hunger. "The natives never want for food," wrote one. The Indians also had ways, many of them involving their amazing knowledge of plants, to treat some of the diseases, get rid of parasites, and keep away mosquitoes and flies. 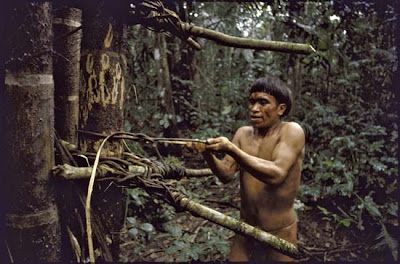 As I read this, I thought, behold the incredible adaptive power of human culture. Because we can share what we learn with everyone in our community and pass it on to future generations, our cultures can learn. A healthy traditional culture draws on thousands of years of experience, accumulated by thousands of people. That knowledge gives us powers far beyond what any person could achieve with his own intelligence and skill, including the power to thrive in lands where outsiders cannot find enough food to survive.
Posted by John at 8:00 PM