The Pictish Symbol Stones of Rhynie

Among the most wonderful mysteries in archaeology are the Pictish "symbol stones." Found across Scotland, they are carved with symbols that seem to be a form of writing. Most probably date to the AD 200 to 900 period. Despite 200 years of effort, no progress had been in translating them. Might the context in which they were erected provide clues? 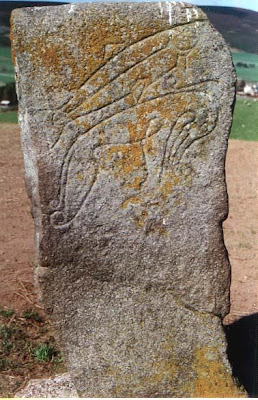 With this in mind, Scottish archaeologists have been investigating a Pictish site at the village of Rhynie, which is home to no less than eight symbol stones. These are all "Class 1" stones, without Christian motifs. The most famous of these, the Craw Stane or Crow Stone (above), has been closely investigated and seems to be in its original location. (Many others were moved over the centuries to churchyards or castles.) Aerial photographs showed traces of a large "enclosure" surrounding the stone. 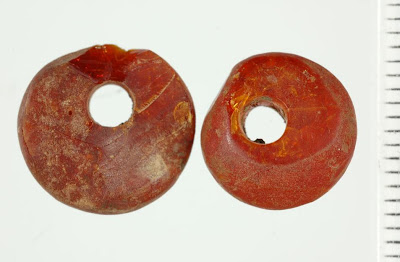 The enclosure proved to be a fortification formed from a double ditch and a wooden palisade, the outer ditch 1.4 m deep (4.5 feet) and the inner 1.1 m. Digging in and around the ditch, the archaeologists recovered many artifacts of the 6th to 7th centuries AD, including late Roman pottery, a shard of a drinking glass from Frankish Gaul, and amber beads (above). 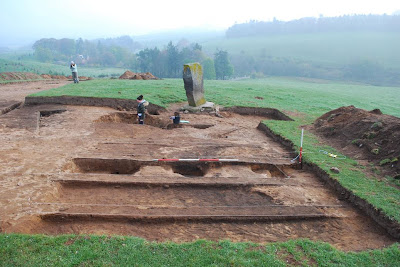 Traces were found of small huts and a large timber building that may have been a feasting hall, very close to the Craw Stane.

The site may have been destroyed by fire and siege:

Almost every feature excavated at Rhynie was full of heavily burnt deposits, and the finds mainly came from what appears to be a destruction layer in the outer ditch. Perhaps this is direct evidence for the sieges, battles and violence recorded in the scant contemporary historical record.

This all fits well with what we know about the Picts: a violent society divided into competing clans or territories, dominated by a warrior nobility. On the other hand this settlement is on a low hill, near to water and agricultural fields, not on top of a mountain like the early Iron Age Tap o' Noth hillfort nearby. 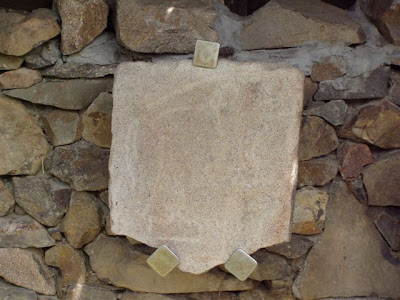 As to what this says about the symbol stones, well, these at least were set up at a noble seat, not along boundaries or at sacred sites. As you can see from the stone known as Rhynie 8, not all of the symbol stones were large and impressive, and the smaller stones like this one may have been incorporated into structures or placed on earthen mounds.
Posted by John at 7:05 AM