The Jamestown Church of 1608 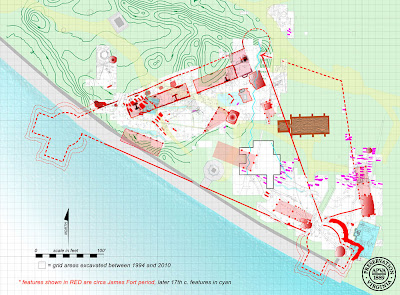 The Jamestown Rediscovery team has found six postholes, unusually deep, unusually large in diameter, and most interestingly, they appear to fit perfectly into Strachey's description of what was Jamestown's first substantial church, built in 1608 and being the probable location of the wedding of John Rolfe and Pocahontas. There is a sense of cautious optimism among the archaeologists that they have indeed found the spiritual hub of the colony.

The location is shown in the map above, within the excavation area outlined in black near the center of the fort. 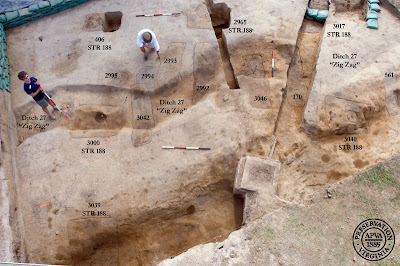 A photograph of this area, with the postholes of the possible church labeled STR 188. Since then the evidence that this structure was the 1608 church has multiplied to the point that director Bill Kelso is talking to the press without caveats about the building were John Rolfe and Pocahontas were married.

Theo Emery has a nice meditation on the importance of this structure in the Times. He notes that while everyone recognizes the centrality of religion to the Puritans of New England, the Virginia colonists are often seen as profiteers with little religious bent. This is wrong; the religion of the Jamestown settlers was different from that of the Pilgrims, but they were still highly religious people who saw what they were doing in religious terms. John Smith was a soldier and an adventurer, but he had been on Crusade against the Turks, hardly the way a man with no interest in religion would have spent his time. Going on Crusade was of course different from engaging in the sort of endless prayer meetings and Bible discussion favored by the Puritans, but not necessarily because it was "less" religious, whatever that might mean. To understand the way the Jamestown settlers felt about their Indian neighbors, you have to remember that they really believed the Indians worshipped images of Satan.

Interpretation of the churches at Jamestown should help restore religion to its place in the Jamestown story.
Posted by John at 7:55 AM