The State Does Not Live Here 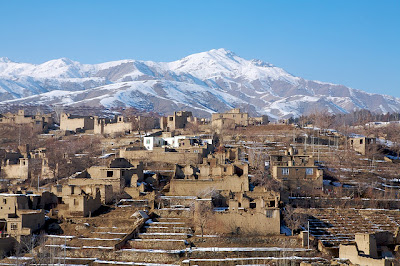 So goes an old saw frequently repeated by the villagers of Istalif, Afghanistan, studied in a new book by American anthropologist Noah Coburn. Instead of clear lines of authority, Coburn found a confusing mass of negotiations and arrangements, with no one really in charge:

Local power brokers might possess wealth, honor, a reputation for piety, abundant weaponry or powerful allies, but they lacked the means or the will to convert those gifts into decisive authority. The maliks, or elders, made a big show of representing their communities’ interests in meetings with outsiders and serving their followers generous meals; each year they presided over festive villagewide “snow picnics,” where the children of Istalif playfully competed to wreck one another’s snow-and-ice dams on the terraced hills above the town. But for all their public visibility, the maliks were only as strong as their communities allowed them to be; they were not secure hereditary chieftains but anxious agents of the professions or neighborhoods or clans they served. . . . The mullahs, for their part, had little ability to intervene outside the mosque, and the village’s wealthy merchants had little sway since they lived primarily in Kabul and often came from the low-status weaver class. Aging commanders of the anti-Soviet jihad supplied money and guns to young men, who struck a menacing pose by wearing the “pakul” hat of the great Tajik fighter Ahmed Shah Massoud, rather than the “karakul” hat favored by Hamid Karzai. While the commanders successfully extorted rent from local merchants who ran shops on public lands, they were unpopular and preferred to remain in the shadows, strenuously avoiding one another as well as any direct conflict with the state.

As always in traditional societies, there is great fear of anything that might upset the existing balance of power:

Coburn found that local leaders often achieved little by design. He watched in disbelief as they rejected a proposal to pave the main road connecting Istalif with the nearby highway leading to Kabul. The new road would have benefited the entire village by reducing the difficulty and cost of travel; but one malik objected that its construction would disproportionately assist another malik’s sector of the town, and the proposal was quietly tabled. In other words, to disturb the existing distribution of power was to risk reigniting too many local conflicts. And as in the American white-collar workplace, no one was eager to speak strongly on behalf of the idea for fear of losing face if it failed. In Istalif, it often seemed, politics meant convincing people you had power by forestalling any event that might reveal you didn’t.

Government is useless, the regional governor ignored by everyone. NATO soldiers are respected when they show up but forgotten as soon as they leave. Coburn is particularly scathing about NGOs, whose ignorance leads them to give gifts to people who cannot use them and needlessly stir up trouble. (Scorn toward NGOs seems to be a requirement for tough, in-the-know writers these days.) Attempts to create a modern democracy in such a society, it goes nearly without saying, are doomed to irrelevance.

Thinking about this, it occurred to me that much of the world lived in societies like this one as little as a century ago. Yet across North Africa and the Middle East, things have changed a great deal. I once read a book about tribal culture in Libya that was eerily like Coburn's portrayal of Afghanistan, but Libya has just experienced a very modern revolution and may soon have some sort of democracy. The changes that matter most are, it seems to me, are urbanization, education, and the spread of modern economic life (in which people have jobs with companies or the government, rather than working together with friends). 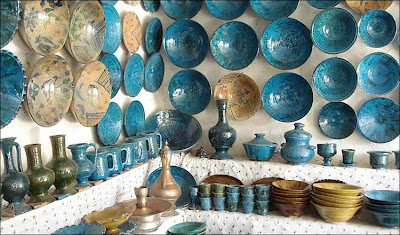 Of course, something is lost when a society moved from informal tribal arrangements to a modern state. But it is foolish to think that any society could have the benefits of modernity (women's rights, medical care, air conditioning, hot showers) without adapting bureaucratic, hierarchical power structure of modern governments and corporations. (Above, some of Istalif's modestly famous pottery.)
Posted by John at 8:24 AM