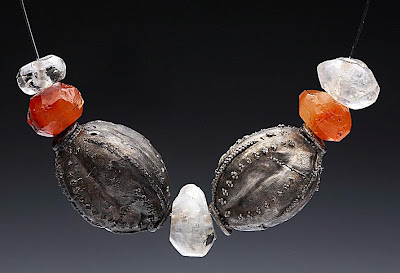 A cemetery consisting entirely of well-appointed chamber graves has recently been excavated at Bodzia in central Poland, not far from the Vistula River. The cemetery dates to the late tenth and early eleventh centuries, and based on the artifacts these people seem to have been Viking invaders:

Weapons were found in the men's graves, i.e. swords of Viking type, langsax (one-edged sword), pickaxe, as well as finds associated with trade. The quality of the grave equipment and features of the funeral rites indicate that the individuals buried in the cemetery were members of the elite — warriors and their family members settled in the Polish territory. Many aspects of the grave goods show close parallels with eastern territories (Kiev Rus) as well as a Scandinavian provenance. The quality of the weapons indicates the high social status of the individuals buried at Bodzia and a wide circle of commercial contacts. 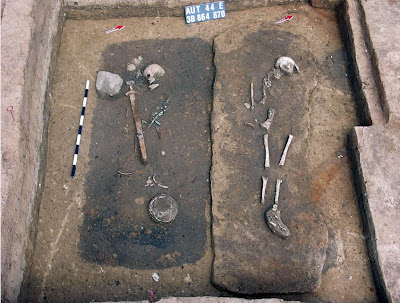 The cemetery consists of rows of "chamber graves," which are like rooms dug into the soil, often lined with wood, within which coffins and grave goods are placed. The chamber is then roofed over, usually with wood, and buried. At Bodzia the coffins were wooden boxes with iron fittings. There was evidence of above-ground wooden enclosures over the tombs, "perhaps fences or houses of the dead." Above is the richest tomb, a young man who died by violence buried with a female companion:

This is shown by the high quality of his ceremonial sword, with silver incrustation and belt fittings which was covered at one end with braid ornaments, while the other end bears a tamga (kinship sign) representing a dvuzub (bident) with a cross — presumably indicating affiliation with the Rurikovitch dynasty. [Grand Princes of Kiev] The man died from injuries evidenced by traces of cuts on his skull and a broken jaw. 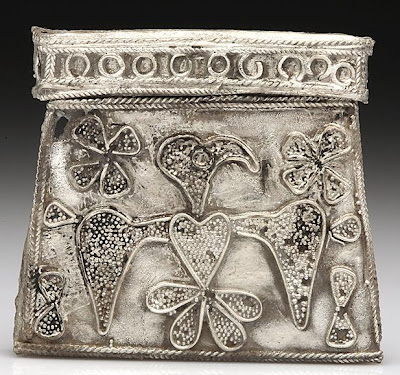 A silver pouch amulet or kaptorga. At top is a necklace made of silver, carnelian, and quartz.
Posted by John at 6:20 PM