The Maya: Conservationists or Destroyers?

Around AD 900, Class Maya civilization collapsed across more than half of its range. The great cities were abandoned, the population fell, and the survivors reverted to a near-subsistence peasant economy. For fifty years now, the reigning theory of why has been ecological collapse caused by overpopulation and resource depletion. The theory is that when their population got large, the Maya were extracting nutrients from their upland farms faster than they could be replenished by natural processes, so yields eventually declined, leading to famine that intensified the already endemic warfare, leading to some sort of complete societal breakdown.

Over the past decade this model has been under attack from two directions. On the archaeological side, studies of the very impressive systems of lowland terrace gardens show that the Maya raised much of their food this way, not with erosion-causing swidden farming in the hills. Also, where there was upland erosion the Maya used it to their advantage, building terraces that caught the eroding soil and turned it into productive gardens. Other studies have shown that the Maya did not practice European-style monoculture but something closer to the tangled, multi-species gardens of contemporary Maya, which are much less susceptible to erosion. 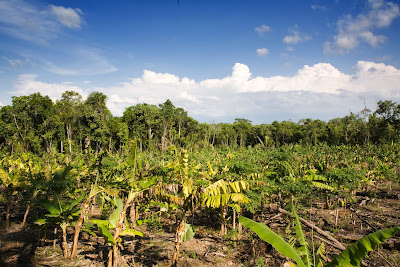 There has also been a big push by politically and ecologically minded anthropologists against the notion that the Maya were destroyers of the land. Some of the work from these people sets off my political hooey detectors, verging on the assertion that only western capitalists are capable of destroying an ecosystem. But it has to be said that today's Maya, whose culture has much in common with that of villagers in the Classic era (size and shape of houses, types of ceramics and tools, village structure, etc.), farm in a way that is entirely sustainable. They have, after all, been farming some of the same regions for 3,000 years. There is an extensive account of Maya forest gardening here, and an article on how this relates to the archaeology of the Classic period here.

Basically, the Maya today use the whole forest, not just the cleared areas around their houses. Areas that look to outsiders like virgin forests are actually carefully tended and shaped. One Maya farmer put it like this:

God created plants and animals and the world around us. Trees grew in the forest, seeds spread, birds sang, and animals flourished. All was already there. Man came along and preferred this plant, favored that seed, enjoyed those birds, and supported those animals, creating and using the forest as a garden to sustain those plants and animals. The job of the forest gardener is to manage the forest by adding, removing and nurturing plants, to make sure that certain species grow where they will be most viable.

As a result, ecologists find that 90 percent of the plants growing in these forests are useful to humans. 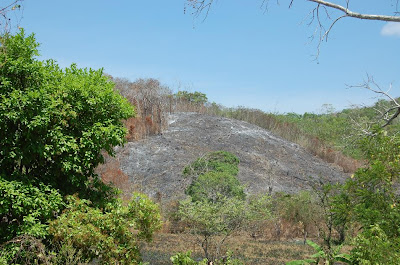 Close to their homes, the Maya manage the forest more directly. They burn each plot about every 25 years. 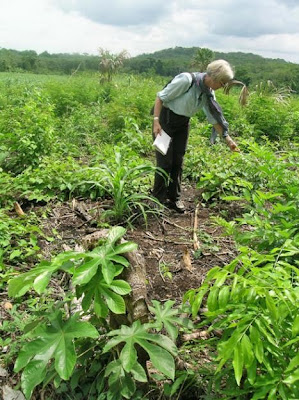 Then they dig in the ashes (along with human and animal manure) and plant annuals, like corn and wheat. (They now use plants from all over the world.) These are planted in mixtures designed to produce year-round food and reduce erosion. 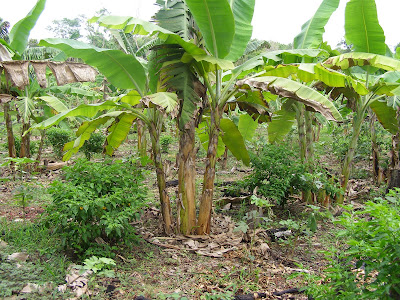 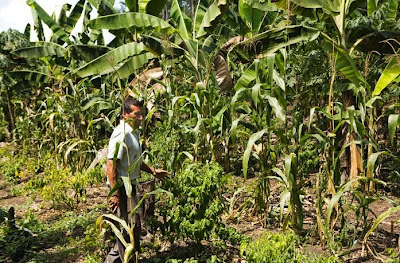 Then they allow certain perennial plants to grow up and rely on them for a while. They also allow certain trees to start growing (the ones that produce fruit, nuts, or valuable timber), and they have several food plants that thrive in the partial shade of the growing trees. 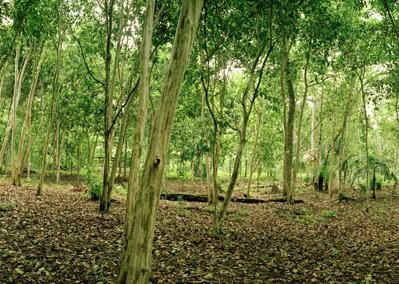 Eventually the forest canopy reforms, but remember that every tree is one selected by the farmers. When the timber trees are mature enough to be used for building, they are cut, the plot is burned, and the process repeats itself. The system produces impressive yields and, as I said, has been carried on in some regions for millennia.

So what did happen to the Maya? I think resource depletion is still the best explanation. After all, even the best system can be thrown out of whack by too much stress. The population of the May region at its peak was much higher than it was in the 19th century, nearly what it is today. Such pressures could have destabilized the system, just as they are destabilizing it today. Besides, there is no evidence of epidemic disease, and I cannot think of any other explanation for the disappearance of "civilization" -- cities, monumental architecture, large political entities, writing -- across so large an area.
Posted by John at 12:46 PM