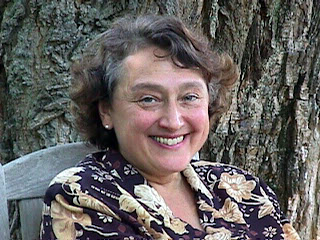 Lynn Margulis (1938-2011) was one of those rare people who managed to be both a Nobel-caliber scientist and a nut. She spent a great deal of time thinking about bacteria, and emerged with a view of life much different from the standard Darwinian picture. To Margulis, bacteria were the norm of life, and everything else an anomaly that needed to be explained. In her view most of the evolution that matters took place among bacteria, before cells with nuclei even existed. All of the crucial systems that sustain life, from photosynthesis to cell division, were pioneered by bacteria, and they developed the crucial organic molecules, like DNA, and RNA, proteins. As she liked to point out, all animals share one metabolic system in their cells, but among bacteria there are more than a dozen. Bacteria, she thought, evolved mainly by mechanisms other than natural selection, sharing useful genes with each other and forming symbiotic partnerships rather than competing to the death. 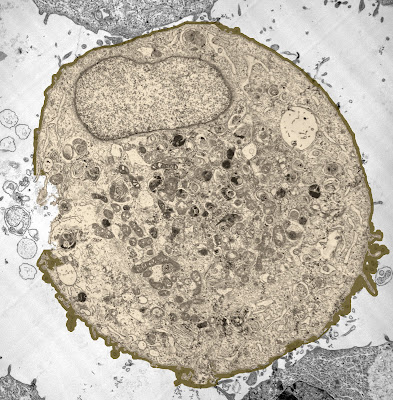 Margulis is best known for her theory about how eukaryotic cells (cells with nuclei) evolved. She believed that they are the result of an ancient symbiosis among bacteria, so that mitochondria and chloroplasts are the descendants of what were once free-living cells:

In addition to the nuclear DNA, which is the human genome, each of us also has mitochondrial DNA. Our mitochondria, a completely different lineage, are inherited only from our mothers. None of our mitochondrial DNA comes from our fathers. Thus, in every fungus, animal, or plant (and in most protoctists), at least two distinct genealogies exist side by side. That, in itself, is a clue that at some point these organelles were distinct microorganisms that joined forces.

This has become orthodoxy, but back in 1966 her original paper was rejected by 15 journals. Sex, she thought, might have begun when one bacterium tried to swallow another:

Sex began when unfavorable seasonal changes in the environment caused our protoctist predecessors to engage in attempts at cannibalism that were only partially successful. The result was a monster bearing the cells and genes of at least two individuals (as does the fertilized egg today) ... Those microbial ancestors that fused survived, whereas those that evaded sexual liaisons died.

Both of these famous theories are facets of Margulis' general idea that microbial evolution happens by cooperation more than by competition. Her ideas in this area have been widely accepted, and it has become common to imagine that the first stage of life's evolution happened among cooperate, gene-sharing organisms. Margulis' nuttiness came in when she argued that the evolution of animals and plants happens in the same way. For most biologists, multi-cellular life is the domain of Darwinism and survival of the fittest, and they reject the notion that gene-sharing is a significant driver of evolutionary change among birds or cacti. One of Margulis' books has an introduction by another biologist, inserted at the publisher's insistence, arguing that the kind of evolution she was positing had never been observed to occur.

Margulis was scathing about promoters of the neo-Darwinian systhesis, saying that it would one day be thought of as "a minor twentieth-century religious sect within the sprawling religious persuasion of Anglo-Saxon Biology." A view of evolution based on multi-cellular organisms, she thought, was "500 million years out of date." According to John Horgan,

She ridiculed the suggestion of Ernst Mayr, Richard Dawkins and other ultra-Darwinians that evolutionary biology might be nearing completion, in terms of not requiring any major additions or revisions. “They’re finished,” Margulis declared, “but that’s just a small blip in the 20th century history of biology rather than a full-fledged and valid science.”

Her general pose of opposition to orthodoxy carried over into politics, where she was an ally of 9-11 "truth seekers," and medicine, where she denied that HIV causes AIDS.

Margulis became a promoter of the Gaia hypothesis, not so much in the spiritual sense but in the sense that all life was to her an interconnected system in which mutual dependence is a more important factor than competition. Such a view requires a very remote perspective on life, since from the point of view of the individual or even the species competition matters very much -- when eaten by a tiger, we are unlikely to derive much solace from the notion that life is ultimately cooperative. A friend of mine and I both read an article by Margulis in which she says that organisms are just "vortices in the energy gradient by which solar energy is radiated back into space," and now whenever our conversation takes a grim turn one of us usually says, "But then, we're really just vortices in the energy gradient anyway." I suppose bacteriology encourages the view that individuals are of no importance, and that what matters is the long-term interactions of millions of organisms from thousands of species.

Margulis was married twice, the first time to astronomer Carl Sagan, another person who was both a successful scientist and a nut. Sad to think that two people so much alike could not get along, but maybe the ways that they were alike (stubbornness, fascination with new and radical ideas, impatience with orthodoxy) are not ways that are conducive to long-term marital happiness, and both were very devoted to their careers.

For science to progress, we need people like Lynn Margulis to develop and promote unorthodox ideas. But we also need boring, sane, rigorous people to test those ideas and reject the ones that don't match up with reality.
Posted by John at 8:53 AM