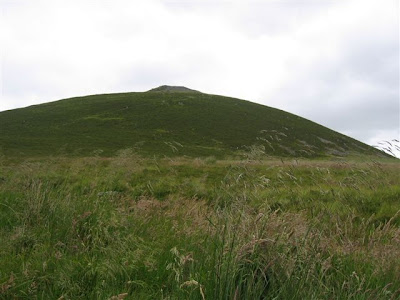 Reading about the recent excavations at Rhynie in Scotland I was struck by pictures of the Tap O' Noth hillfort, which looms over the village. This fortress sits on top of a conical hill with an elevation of 1851 feet (563 m) , 1300 feet (400 m) above the village below. 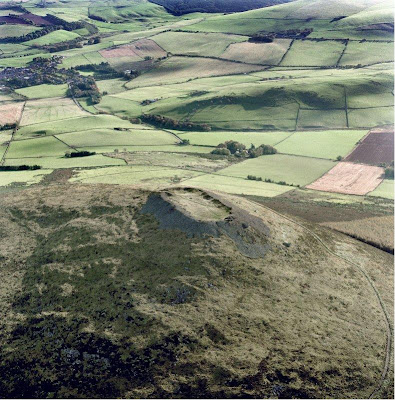 According to the site form:

The fort that crowns this site is the second highest in Scotland and consists of a single wall (now overgrown and heavily vitrified) which may have originally been more than 20ft (6.1m) thick and encloses an area about 335ft (102m) by 105ft (32m). A depression about 90ft (27m) from the S end represents the site of a well or cistern. 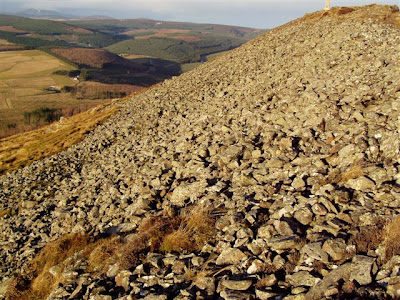 The stone walls of the fort are "vitrified," that is, they were heated until the stones partially fused together. How this was done is something of a mystery. Just building a fire on the stones won't work, since it won't get hot enough. Some means of intensifying the heat (bellows, special arrangements of wood to form temporary ovens, etc.) must have been used, or else gigantic piles of wood. Or, the melting may have been done accidentally. If the wall had wooden upper works that burned, this may have done the job. 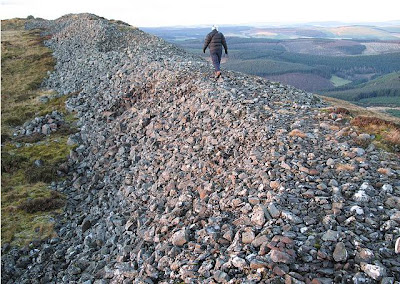 The view from the fort is spectacular; sometimes the sea is visible, 20 miles (32 km) away. 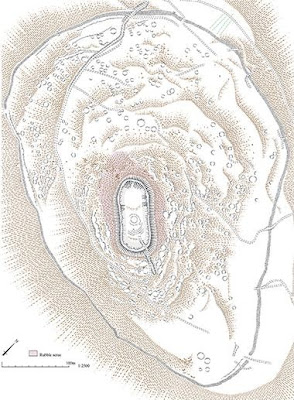 Despite several archaeological investigations stretching back to 1857, little is known about the fort. It seems that by 1857 little was left inside the walls, and whatever there was was disturbed by nineteenth-century archaeologists before modern methods could be employed. No entrance is visible; the current ramp was constructed in the nineteenth century. The reports collected by the Scottish monument commission include notes like:

Traces of outworks are discernible outside the entrance to the SE, but are too vague to survey. The interior is featureless, except for the well/cistern which is now choked with stones.

There are traces of outer works farther down the slope, but these were mostly destroyed by stone quarrying.

Most British hillforts date to the Iron Age, some to the late Bronze Age. Very few artifacts seem to have been found here; wikipedia mentions a stone ax and a bronze rein ring dating to Roman times, neither of which seem likely to have been used by the fort's builders. 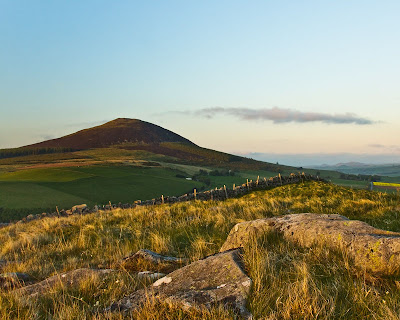 Erecting such an impressive fort on top of that mountain required a very great effort and speaks to an age marked either by terrible violence and fear, or a weird desire to live on windswept summits. Supplying the fort over time would have been even more laborious. Likely, then, it was maintained as a place of retreat or a garrison rather than a year-round residence; this would fit the very limited evidence of habitation.
Posted by John at 6:55 PM