The Collapse of the Church Hill Tunnel 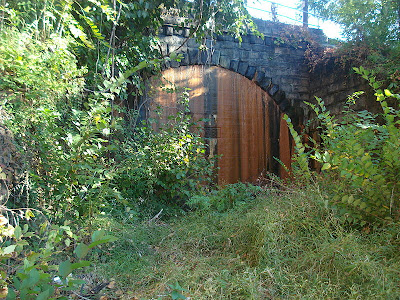 On October 2, 1925, a 4,000-foot long (1200 m) railroad tunnel under Church Hill in Richmond, Virginia collapsed. Four railroad workers a locomotive, and ten flat cars were trapped inside. One man managed to drag himself out, but he died soon afterward. One body was dug out. 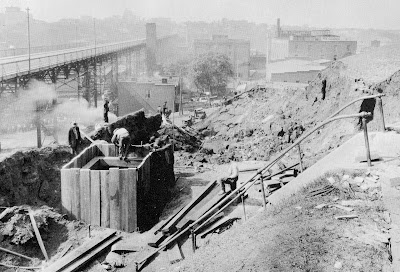 Despite strenuous efforts, including the digging of new shafts (above) the rescuers were unable to reach the other men. The tunnel had to be abandoned:

Huge yawning cracks, opening with fearful rapidity, over the entire section of Jefferson Park Hill where the big steam shovel had been cutting away tons of earth in the effort to reach the engineer and negro workman who were caught underneath the cave-in of the Chesapeake and Ohio tunnel, off Nineteenth Street, late Friday afternoon caused the officials in charge of the rescue work to abandon that steam shovel at 3:30 o'clock yesterday afternoon.

Many of the gaping openings in the side of the hill measured many feet in width and went to a distance of thirty feet or more, so numerous were the openings that the hillside near the scene of the tragedy resembled a giant cake that had been broken into bits by a family of hungry urchins. . . .

The tunnel had been built in 1872 to 1873. One section had collapsed during construction, but this sign of the soil's instability was ignored, and work went on. The point was to connect Richmond's railroads to a line running to the new coal pier at Newport News. The tunnel remained in service until 1902, when a new viaduct took over this function. In 1925, the Chesapeake and Ohio RR was trying to re-open the line when the catastrophic collapse took place. 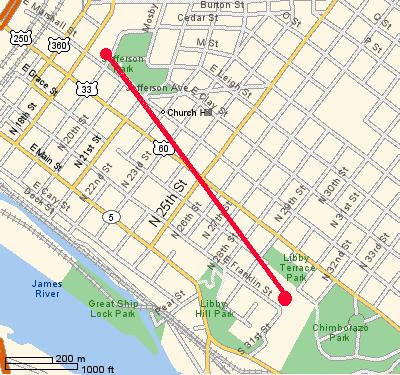 The train and the workmen's bodies are still down there, in the sealed tunnel. Local legend has it that people sometimes here the the trapped men shouting for help, or trying to dig their way out with picks. At top, the sealed eastern end of the tunnel. Above, the approximate location of the buried tunnel on a modern map.