The Pillar of Eliseg 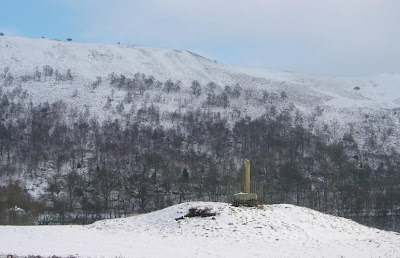 The Pillar of Eliseg is a medieval stone monument in the narrow valley of the Nant Eglwyseg in northeast Wales. It was once a cross, but the arms were broken off long ago. It is near the ruins of the Valle Crucis monastery, which was named after this cross. The Pillar once bore a long Latin inscription saying that the cross was raised by Concenn, ruler of the kingdom of Powys, in memory of his great-grandfather, Eliseg. According to the Welsh king lists, Concenn died in AD 854. The Pillar seems to be within its original base, which is on an ancient mound. The Pillar was investigated by the local landowner, Thomas Lloyd, in 1773, and he is supposed to have found a burial in a small stone chamber, with a silver disc. 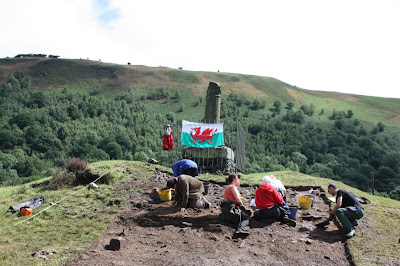 More excavations have been carried out at the site just recently, by Project Eliseg, a cooperative venture of two Welsh universities. Their works showed that much of the mound has been disturbed, presumably by the aforesaid Thomas Lloyd, but they did find intact areas that resembled the soils of neolithic mounds. Unfortunately, they found no artifacts.

The text of the pillar inscription is no longer legible, but it was transcribed by the seventeenth-century antiquary Edward Lhuyd. It celebrated the lineage of Concenn's dynasty, connecting them to various figures of Welsh history and legend, including the Roman usurper Magnus Maximus, the Dark Age ruler Guarthigirn (Vortigern) and Guarthigirn’s son Britu whom Saint Germanus blessed. Eliseg, or Elisedd as he appears in other texts, is celebrated for some sort of victory over the Angles. Surely that is a clue to the reason for the erection of the cross. Concenn must have wanted to emphasize his connection with an ancestor who fought the English invaders successfully, claiming the mantle of warrior against the Angles for himself -- was a new war brewing? Did he have a rival who favored peaceful relations? Was he asserting a claim to land Eliseg had conquered or defended? The choice of the ancient mound for the location is also interesting; no doubt this was a place around which many legends swirled of ancient times. 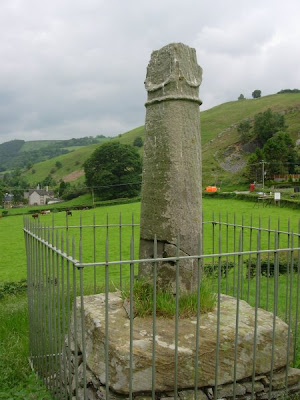 Lluyd's translation of the text:

† Concenn son of Cattell, Cattell son of Brochmail, Brochmail son of Eliseg, Eliseg son of Guoillauc.
† And that Concenn, great-grandson of Eliseg, erected this stone for his great-grandfather Eliseg.
† The same Eliseg, who joined together the inheritance of Powys . . . throughout nine (years?) out of the power of the Angles with his sword and with fire.
† Whosoever shall read this hand-inscribed stone, let him give a blessing on the soul of Eliseg.
† This is that Concenn who captured with his hand eleven hundred acres [4.5 km²] which used to belong to his kingdom of Powys . . . and which . . . . . . the mountain

[the column is broken here. One line, possibly more, lost]

. . . the monarchy . . . Maximus . . . of Britain . . . Concenn, Pascent, Maun, Annan.
† Britu son of Vortigern, whom Germanus blessed, and whom Sevira bore to him, daughter of Maximus the king, who killed the king of the Romans.
† Conmarch painted this writing at the request of king Concenn.
† The blessing of the Lord be upon Concenn and upon his entire household, and upon the entire region of Powys until the Day of Judgement.