There is, in case you wondered, no First Amendment right to sleep in public parks:

Long before a Manhattan Supreme Court judged ruled against the protesters, the Supreme Court settled the matter of protests camping indefinitely in public parks in Clark vs. Community for Creative Nonviolence (1984), with a majority opinion written by JFK-appointee Byron White. The case law protecting private-property rights from permanent protest occupancy is rooted in Pruneyard Shopping Center vs. Robbins (1980). While the states have a great deal of latitude in determining their individual rules—and Zuccotti Park’s odd status as a privately owned public space creates room for debate—basic property rights are not suspended for protests, no matter how heartfelt.

So all the various mayors across the country had every right to evict the Occupy Movement protesters. 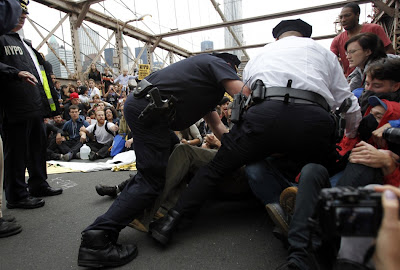 Which still leaves the question, why did they feel like they had to? And why have so many police been so brutal about it? There is something about the sight of scruffy, hippie-ish protesters that fills many Americans with rage. They somehow offend against basic notions of order and decorum, leading otherwise sane people like New York's Mayor Bloomberg to fulminate against unsanitary conditions, breakdowns of law and order, epidemics of rape, and similar mad exaggerations, as if these tiny protests were giant, anarchic slums. Even Portland's very liberal Mayor Sam Adams ordered the eviction of Occupy Portland, saying

Occupy has had considerable time to share its movement’s messages with the public but has lost control of the camps it created.

I just don't get why these protests are such a big deal. These brutal evictions poison our politics, burning more frightening images of police vs. citizen violence into our historical memories. A whole new generation of left-wing young people is learning to hate the Man, and conservatives are scaring themselves with visions of rebellion by unwashed anarchists. Besides, people get hurt. It is worth it? Why does the presence of a few hundred smelly people in under-used parks matter so much?
Posted by John at 7:51 PM