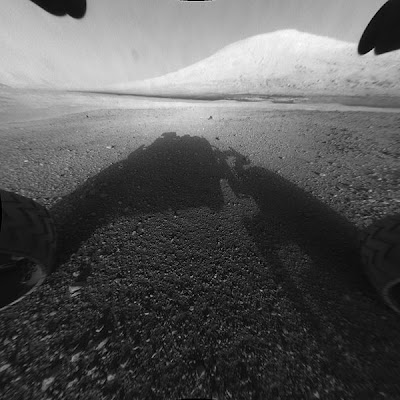 The Curiosity rover has landed safely next to Mount Sharp, which rises three miles high in the center of Gale Crater. Why there?

Mount Sharp is a mystery to geologists. It looks like a mountain, but it seems to be made of layers of sediment from top to bottom. The lower layers look like they were formed in water, but not the upper layers. How did it form? One theory is that it was built up by two different episodes of deposition. The first was formed in a lake that filled the crater.

Then the lake dried up and the carter was scoured by the wind.

Then a second layer of sediment was deposited, probably by the wind, filling the entire crater.

Finally, most of that sediment was scoured away, leaving Mount Sharp standing in the crater, taller than its rim.

If you think this sounds like a bunch of guesses, well, so do some geologists. But they hope that by sending Curiosity to explore the mountain they will bet a better idea of what it is made of, and therefore how it formed. Which should give us a better idea of the forces that shaped the surface of Mars.
Posted by John at 11:00 AM