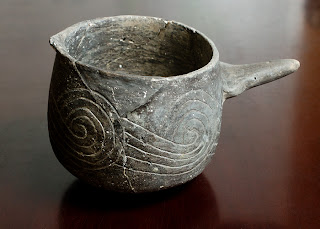 In the news this week, confirmation that the inhabitants of Cahokia, the great Mississippian mound city near St. Louis, used the "black drink" well known from the historic southeast. This is anything but surprising, since the shell cups used for the drink have been found at Mississippian sites in Wisconsin and Oklahoma, both farther from the native range of the source plant than Cahokia is. Instead of those ubiquitous shell cups, the rulers of Cahokia seem to have taken their black drink from these specially made ceramic cups. The handles indicate how this was done; the black drank was prepared in large pots, and each person used a smaller cup to dip out his portion and drink it down. 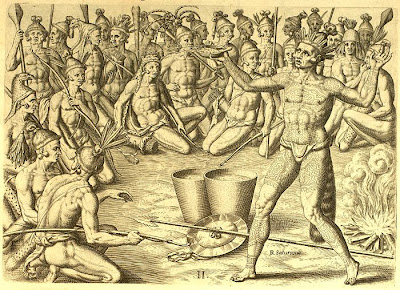 The black drank was made by boiling the lightly roasted leaves and stems of the Yaupon holly,  Ilex vomitoria. This produced a concoction with as much as six times the caffeine of strong coffee. If you drank a little, you presumably stayed awake all night, which may be why the Cherokee and other Indians passed around a pot before council meetings. If you drank a lot, you puked your guts out. (Hence the scientific name.) Since many Indians consumed large amounts of black drink before important rituals, this summons up the surreal image of a circle of dignified chiefs and warriors each taking a large draught from the communal pot, then each turning away to vomit on the ground before getting back to the ritual. At Cahokia the black drink cups were found together with pipestone figurines depicting beings related to agricultural fertility and the underworld. 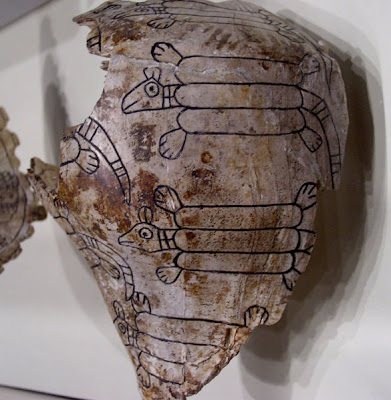 Use of the black drink goes back at least to Hopewell times (200 BCE to 500 CE), when the shell cups first become common, and probably much farther.
Posted by John at 11:01 AM