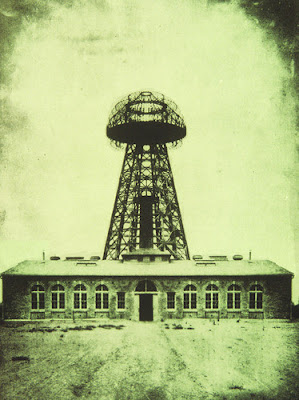 Inventive genius Nikola Tesla designed this tower to broadcast wireless telegraphy across the Atlantic, and to experiment with the wireless transmission of energy. Construction of the tower began in 1901, but alas it was never finished despite backing from J.P. Morgan and John Jacob Astor. It was torn down in 1917. 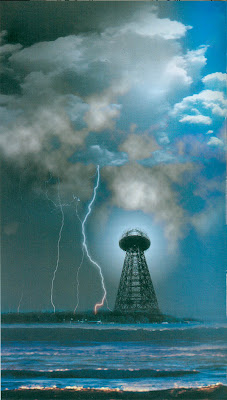 The tower was located in Shoreham, New York, on Long Island. The tower is gone, but the laboratory building remains, and the Tesla Science Center is trying to raise the money to turn it into a museum devoted to Tesla's work. 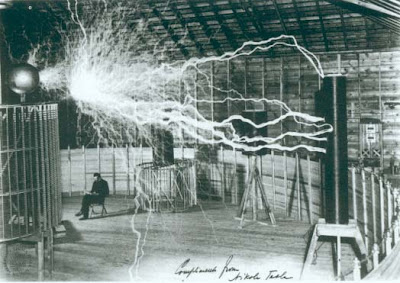 The most intriguing thing about Tesla's work in Shoreham is his plans for the wireless transmission of electrical energy. I just read some of Tesla's writing on the subject, but I don't find them at all clear. So I turned to some recent attempts at explanation, but alas I find them even less clear. But so far as I can tell Tesla's idea was not to shoot electrons from point A to point B (like lightning), but to induce fluctuations into the earth's electrical field that would somehow be picked up by a properly tuned receptor, similar to the way a properly tuned receptor picks up radio waves. Some of his more obscure notes speak of "telluric waves" that would pass through the earth, and he certainly experimented with using the earth's ionosphere as a transmission mechanism. 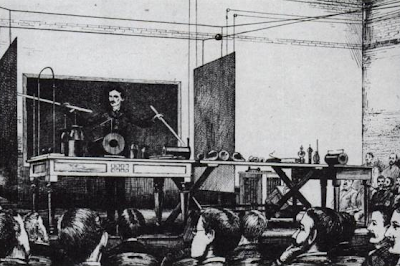 Tesla performed some famous demonstrations of wireless power transfer but never made it work on a large scale. Some of his fans insist that he was on the verge of achieving this before Edison's friends nefariously stopped him with lawsuits and withdrawals of funding, but since nobody else has made it work since I rather doubt this. Still, Tesla was sure it would work, and he was a lot smarter than I am, so who knows?
Posted by John at 8:54 PM