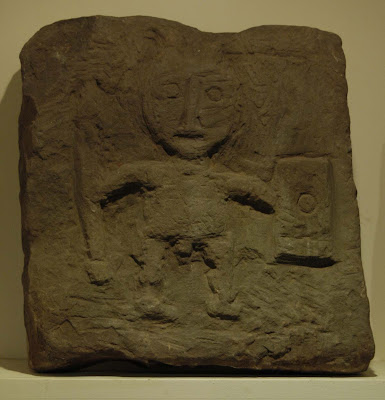 This stone relief was found in the 1870s, during excavations at the Roman frontier fort known as Maryport. The fort is on the Solway Firth just west of the west end of Hadrian's wall, part of a series of fortifications that made it more difficult to bypass the wall by sea. The relationship between this crude stone, in native British style, and the elegantly carved Roman work found at the site is obscure. It is now in the Senhouse Museum, by the site. Below, for contrast, is of the large group of Roman altars found at the fort.

The site has been in the news this summer because new excavations have turned up evidence that the site was occupied into the sixth century, perhaps down to 600 CE. 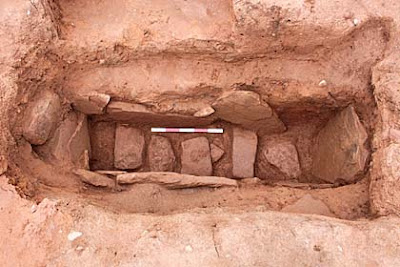 The evidence is the burial ground of a Christian church that remained in use through the period; above is one of the graves. This continued occupation is not surprising. One of the parts of Britain where Germanic  invaders made little headway in the 5th century was the far north, presumably because the people settled by the Wall included numerous former soldiers or military families still able to defend their many strong forts. More mysterious is the cultural process that transformed them from late Roman soldiers into the Welsh heroes of "the North," (Y Gogledd), the setting of many Welsh heroic verses that were preserved in later centuries. Whatever light archaeology can shed will be most welcome.
Posted by John at 6:44 AM