The Comanche Empire is a remarkable book. After reading it I was left thinking that maybe historical scholarship really does make progress, and we can understand some things better than our ancestors did. At its core the book is a narrative of political events, but it integrates ecological history, economic history, climatology, ethnography, comparative imperialism, and feminist history, and uses them to inform the narrative in compelling ways. For example, we seem to know a lot now about how many horses, buffalo, and cattle can inhabit the plains without degrading the landscape, and how many pounds of meat could sustainably be harvested from herds of each beast. Hämäläinen draws on this scholarship to explain both the economic underpinnings of the Comanche economy, and its eventual collapse. It could not have been written before the 1980s. Without this detailed eco- and economic history, the story of the Comanche's rise and fall would be much less convincing.

The Comanche Empire is also, I thought, remarkably even-handed. The history of Indian-white relations is bitterly political, but maybe we have made some progress here, too. Histories written before 1960 usually showed Indians as obstacles to the inevitable white expansion, alternatively bestial or tragic. Then came the weeping stage, with books like Bury My Heart at Wounded Knee laying out at length the crimes of white men. Now, maybe, we can have histories that try to describe and explain what actually happened instead of weighing in for one side or the other. Hämäläinen says that his goal was to "restore agency" to Indians, that is, to show how they acted, and why, when confronted by white imperialists. He does a magnificent job. 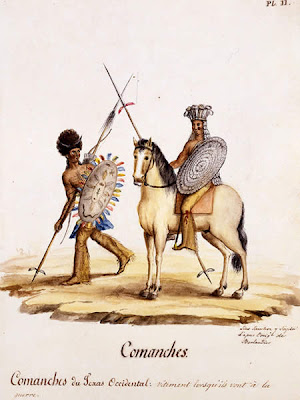 It is always good to remember, when thinking about plains Indians, how little time their way of life existed. Spanish horses reached the southern plains around 1690, the northern plains perhaps 20 years later. Over the next century, the plains peoples reshaped their societies, their ways of life, even their religions to the new world of horses and buffalo. Read Black Elk Speaks and you see that horses had been integrated into Lakota creation stories. These societies must, therefore, have been changing rapidly; their exquisite adaption to the plains cannot have sprung into life overnight, but must have evolved over decades. The tribes that rose to the top were the most flexible and adaptable, the ones who first spotted the advantages of new techniques or organizations and exploited them most fully. In a world visited by frequent, devastating epidemics, Indian tribes also had to bring in new people, either by adoption or enslavement, to keep up their numbers.

The Comanche acquired horses and migrated onto the plains just after 1700, and by 1730 they were appearing regularly in Spanish colonial documents.  Like the Iroquois in the northeast, they were able to use their position between colonial empires -- Spanish and French, then Spanish and British, then Spanish and American -- to carve out an Indian empire of their own. From the beginning their history on the plains was one of war and conquest. They began by driving the Apaches from the plains, in alliance with the Utes, then turned against the Utes and drove them off, too. They made alliances and broke them, launched wars and made peace, used a combination of trading and raiding to extract so many horses, mules, and captives from Texas that by the 1820s they had nearly destroyed the colony. It was this collapse, brought on by the Comanche, that led the Mexican leaders of Texas to open their borders to unlimited Anglo settlement, sealing their fate. The Comanches were not just victims of imperialism, but actors who shaped their own destiny. 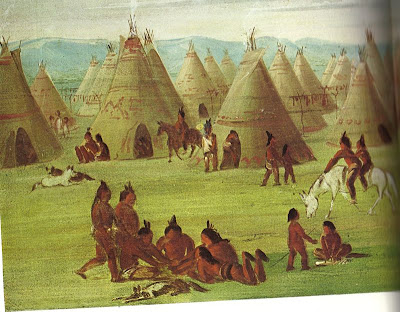 Hämäläinen spends a lot of time on the eighteenth century, the period of the Comanche's rise to greatness. He carefully mines the sparse Spanish sources for nuggets of information about the tribe. I found this discussion tedious, because the sources are not very exciting and Hämäläinen is not an especially good writer. (Hey, he is Finnish). Less rigorous historians would probably begin discussing Comanche ethnography in this early period, but Hämäläinen leaves all that for later. The ethnographic sources are all late, mostly after 1830, and he is not sure how well they apply to the earlier period. So the reader has to wait for the middle of the book before we get any material on Comanche family life, religion, and so on -- the kind of details that make Indian history fun to read. The best part of the book is the description of the Comanche at their height, from 1810 to 1840. Their prominence attracted the attention of many astute observers, who left us detailed descriptions of Comanche ways. The tribal memories recorded by ethnographers in the 1890s also begin to be relevant. This part is fabulous, a tour de force of total history incorporating all the tools of modern scholarship and relating fascinating, dramatic events. (See here for more on this material.)

The collapse of the Comanche state happened with stunning speed. I had always thought, rather naively, that populations of plains buffalo held up pretty well until white commercial hunters came along and slaughtered them. Not so. The Comanche way of life pushed the plains ecosystem to its limits. Not only were they killing unsustainable numbers of buffalo, their huge herds of horses competed with the buffalo for scarce winter forage in the river valleys, and herds of wild horses competed for grazing in the mountains. Comanche diplomacy worsened the situation, since they often granted tribal allies hunting rights on the plains as part of peace treaties. Eventually, more than a dozen allied tribes and even some Spanish New Mexicans were allowed to hunt on the plains. A severe drought in 1845 to 1850 brought on a terrible subsistence crisis. The Comanche were reduced to eating their horses and even making their clothes and tipis from horse skins. It was just at this time that the Comanches were trying to fight off an invasion of settlers from Texas, and in the midst of their famine they could not resist. They lost their precious unity, and some groups made peace while others tried to make war. They lost their allies and their power was broken. 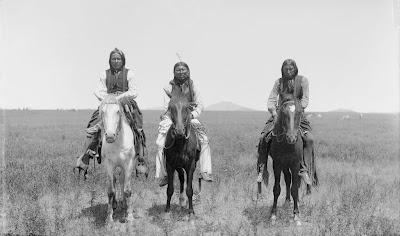 After the Civil War, with Texas humiliated and disarmed, the Comanche had a brief resurgence. They resumed raiding, now focusing on cattle rather than horses since they needed beef to eat. They also resumed slave raiding, carrying off many captives from Texas and Mexico. Some they kept for themselves, but most they sold in New Mexico or to tribes farther north. It was their slave trading, as much as anything else, that brought down the wrath of the US Army on their people. Hard-bitten anti-slavery fanatics like Sherman and Sheridan were not going to tolerate a bunch of slave-raiding savages in the US, and they waged a war of extermination against the Comanche until they surrendered and settled down on their reservation.

The story of the Comanche is one that I am glad to know. It informs my understanding of American history in new ways. Hämäläinen's book tells this story well, if with a few too many words and a bit much jargon, and he shows the potential of the historian's new tools to rewrite major pieces of our past.
Posted by John at 7:55 PM