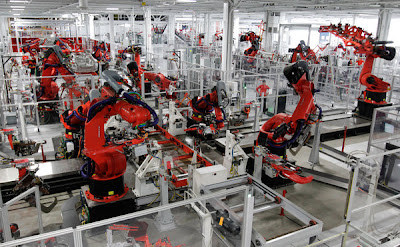 John Markoff in the Times:


DRACHTEN, the Netherlands — At the Philips Electronics factory on the coast of China, hundreds of workers use their hands and specialized tools to assemble electric shavers. That is the old way.

At a sister factory here in the Dutch countryside, 128 robot arms do the same work with yoga-like flexibility. Video cameras guide them through feats well beyond the capability of the most dexterous human.

One robot arm endlessly forms three perfect bends in two connector wires and slips them into holes almost too small for the eye to see. The arms work so fast that they must be enclosed in glass cages to prevent the people supervising them from being injured. And they do it all without a coffee break — three shifts a day, 365 days a year. All told, the factory here has several dozen workers per shift, about a tenth as many as the plant in the Chinese city of Zhuhai.

This is the future. A new wave of robots, far more adept than those now commonly used by automakers and other heavy manufacturers, are replacing workers around the world in both manufacturing and distribution.

I worry about this. What are people going to do when manufacturing joins agriculture as a nearly jobless sector? It isn't that there won't be work; we'll find something to do. But will it be as meaningful to people as making things, or growing things?

Every time I read something about the new economy of "symbol manipulators," I wonder if the economist who wrote it has ever met many people without Ph.D.s. Most people, as I have said before, want work in which they either help people or work with something concrete. Like Matthew Crawford, who quit a think tank to open a motorcycle repair shop, many people despise white collar work:


. . . confrontations with material reality have become exotically unfamiliar. Many of us do work that feels more surreal than real. Working in an office, you often find it difficult to see any tangible result from your efforts. What exactly have you accomplished at the end of any given day? Where the chain of cause and effect is opaque and responsibility diffuse, the experience of individual agency can be elusive. “Dilbert,” “The Office” and similar portrayals of cubicle life attest to the dark absurdism with which many Americans have come to view their white-collar jobs.

But since there is nothing I can do about it, maybe I should stop worrying about jobs lost and think instead about a world in which manufactured goods get cheaper all the time, leaving us more resources for health care, education, and entertainment.
Posted by John at 1:44 PM