Eminent Domain and the Keystone Pipeline 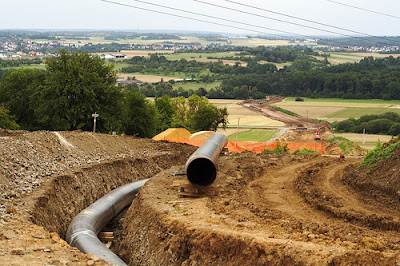 A Texas state judge has just ruled that the Keystone Pipeline can use eminent domain to seize private land for construction. This leaves me wondering, what are all those Tea Party types who were so angry about the Supreme Court's Kelo vs. City of New London verdict in 2005 going to say this time? Back in 2005, as I recall, a wide range of conservatives were up in arms about the use of eminent domain to seize land for private development. The Keystone Pipeline is an entirely private enterprise, and in fact it is owned by Canadians. Yet the Sate of Texas has given it the right to take Americans' private land, whether they want to sell or not, at a price set by the court. Will anti-government types be outraged? or will they just accept this, given that building the pipeline has become a key part of the Republican agenda?

It is in fact impossible to build any sort of infrastructure -- power lines, pipelines, railroads, fiberoptic cable, roads, what have you -- without eminent domain. The state must have this right. Of course there are better and worse uses of the power, but that, it seems to me, has to be a political decision. I await a serious answer from someone in the anti-Kelo wing of the Republican Party. 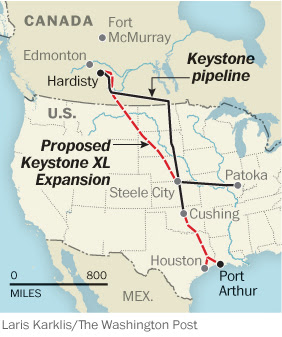 (This is the southern part of the pipeline, which the Obama administration already approved. It is the northern half that remains under review, although it looks to me like Obama is just waiting until after the election to issue that approval.)
Posted by John at 9:37 AM