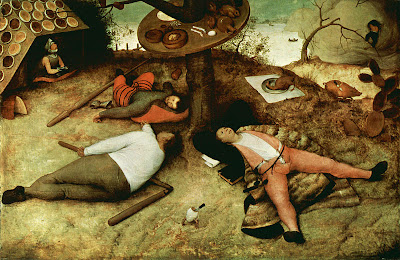 How do people imagine paradise? Well, for one thing, paradise is a place where nobody works. From the gardens of the Koran to the Land of Cockaigne, where already cooked animals wandered around ready to eat, escape from labor has always been part of how we imagine the perfect life.

In the 19th century, as the possibilities of labor-saving technology began to dawn on the future-minded, they imagined that at least this one part of paradise might be made real. In the future, Karl Marx suggested, people would seek self-fulfillment instead of laboring for gain. In 1930 economist John Maynard Keynes wrote an essay titled "Economic Possibilities for Our Grandchildren," in which he projected that a hundred years in the future people would only have to work 15 hours a week to maintain their standard of living.

Here we are, 82 years on, and we work just as many hours now as we did in 1930. Richard Posner recently read a book by Keynes biographer Robert Skidelsky and his son Edward, titled How Much is Enough? Like many others, the Skidelskys imagine that with ever-improving technology, we could in the future devote less and less time to work and more and more to achieving a "good life," which they define as "worthy of desire, not just widely desired."

Posner is not impressed. It is not that these calculations are off; Keynes was almost spot on in predicting how labor productivity has risen since 1930. We really could work only 20 hours a week and have the standard of living of Englishmen in 1930. But why would we want to live with cold showers, freezing rooms, boring food, bad teeth, worse plumbing, air thick with coal smoke, and all the other inconveniences of life in 1930? No great devotee of work myself, I would certainly choose to work 40 hours a week for central heat and air conditioning, effective dentistry, comfortable clothes, tasty food, ibuprofen, and the internet. In fact, I do.

Posner is even less impressed by the Skidelskys' great esteem for leisure. If we worked half as much as we used to, he asks,


What would we do with our newfound leisure? Most people would quickly get bored without the resources for varied and exciting leisure activities like foreign travel, movies and television, casinos, restaurants, watching sporting events, engaging in challenging athletic activities, playing video games, eating out, dieting, having cosmetic surgery, and improving health and longevity. But with everyone working just 20 hours a week (on the way down to 15 in 2030), few of these opportunities would materialize, because people who worked so little would be unable to afford them. Nor could leisure-activity services be staffed adequately. . . .

The Skidelskys have an exalted conception of leisure. They say that the true sense of the word is “activity without extrinsic end”: “The sculptor engrossed in cutting marble, the teacher intent on imparting a difficult idea, the musician struggling with a score, a scientist exploring the mysteries of space and time — such people have no other aim than to do what they are doing well.” That isn’t true. Most of these people are ambitious achievers who seek recognition. And it is ridiculous to think that if people worked just 15 or 20 hours a week, they would use their leisure to cut marble or struggle with a musical score. If they lacked consumer products and services to fill up their time they would brawl, steal, overeat, drink and sleep late. English aristocrats in their heyday didn’t work, but neither did they cut marble or explore the mysteries of space and time. Hunting, gambling and seduction were their preferred leisure activities.

Of course Posner is a famous workaholic who has written far more books than anyone's career requires, but I think he has the better argument here. Leisure, in the sense of things done just for fun, is a much smaller part of what makes life worth living than people like the Skidelskys imagine. I come closer to Freud's formula for a fulfilling life, which was "love and work." And when healthy people are given great amounts of leisure, they often get so bored that they take jobs anyway. I saw a documentary once on those freaky people who hardly ever sleep, and many of them had two jobs because they didn't know what else to do with themselves.

In my utopia, people would still work, but we would try to find ways to make more work more meaningful and fulfilling: giving people greater control over their tasks, making companies into shared enterprises instead of pyramid schemes in which the CEO gets 200 times as much as you do, eliminating tedious paperwork, and so on. Work worth doing is, I think, one of the best things about life, not something we should be trying to phase out.
Posted by John at 5:52 PM