Scattered across the southeastern United States are groups of people that historians call "tri-racial isolates." The people in these communities have brown or olive skin, and they look pretty much like mulattoes, that is, mixes of African and European. But their own traditions insisted that they were something else: usually American Indian, Portuguese, or Turkish, but sometimes more exotic ethnicities. Throughout the nineteenth century some of these families waged legal struggles to have themselves classified as white, with all the privileges that entailed in a world of racial segregation. Some of them were at times successful, winning lawsuits that allowed them to vote and testify in court as whites. But their white neighbors always thought of them as no-good half breeds. These groups tended to be insular and to marry among themselves. Intensive genealogy has shown that these communities have existed since the mid 1700s, and some of the family names can be traced back to the 1650s. 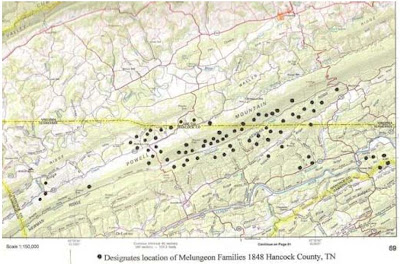 One of the most famous and best defined of these groups is the Melungeons, who live on two ridges along the Tennessee-Virginia border. The family names include Goins, Collins, Sizemore, Mullins, Riddle, Moore, Minor, Denham, Gibson, and Goodman. They have lived in this area since the late 1700s, keeping much to themselves.

You might have been thinking, isn't the question of where these people came from one that we can now answer with genetic testing? And, yes, the same thing has occurred to historians interested in these groups, and to genealogists from within them. But the genetic work done before now has been of dubious quality. Now, though, I can point you to a study of Melungeon genetics that seems to meet the best scientific standards. Which does not mean, mind you, that it is "true," only that it conforms to the current state of the art for the genetic study of ethnicity.

The study is by geneticist Roberta Estes and three Melungeon historians. The basic finding of their genetic studies is summed up in their work on Y chromosome DNA, which is inherited through the male line. Of the 22 "haplogroups" (lineages) they identified, 12 are European, 8 are African, and 1 is Native American. They had less success with tracing mitochondrial DNA, inherited through the maternal line, but all of what they identified appears to be European. Their tests on the rest of the DNA from their subjects, which is a vastly more complicated problem -- if you have been taken in by one of those "you are 20% African 80% European" scams, take a look at this report and see how complicated the problem really is -- seem to line up pretty well with the Y chromosome data: majority European, large minority African, perhaps a tiny minority of Native American. They found no evidence of Mediterranean or Turkish ancestry.
Posted by John at 8:15 AM

Thanks, John, for a very good review of our study.