Toy Dogs in the Iron Age 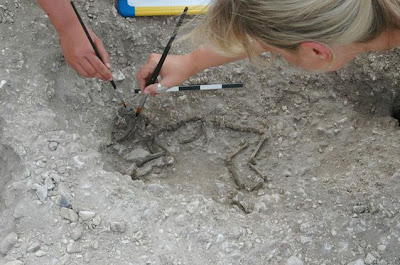 This tiny dog, the size of a modern toy poodle, was recently excavated at the Silchester Roman Town site in England. It seems to have been given a formal burial, so it was somebody's beloved pet. It dates to early Roman times, around 50 to 100 CE.

It amuses me to think of British chieftains with toy dogs.

Perhaps the dog was a Roman gift. Perhaps toy dogs were one of the secret weapons of Roman diplomacy, converting belligerent tribesmen into charming villa dwellers with their eyes and tongues and yappy barks.
Posted by John at 11:59 AM