How Did our Budget Deficit Get so Big? 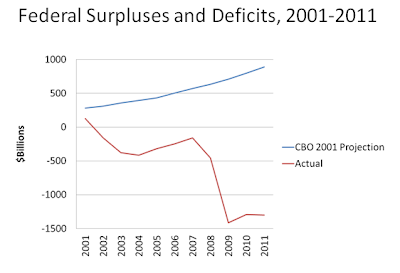 Charles Blahous has the numbers that explain how the huge surpluses predicted by the CBO in 2001 turned into gigantic deficits. It is a complex tale, and I refer the reader to his article for the details. But it boils down to this: 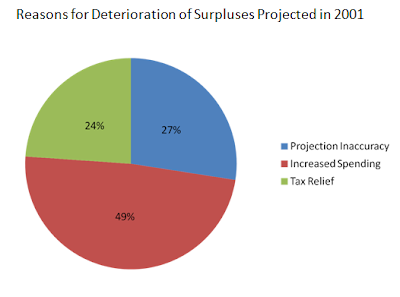 As you can see, Bush's tax cuts were only about a quarter of the problem. Another quarter was the excessively rosy economic forecasts used by the CBO. (And I remember reading op-eds by pro-tax cut people who thought the CBO forecasts were too conservative.) Half was what Blahous calls "increased spending," which means mostly the trillion dollar Iraq War, increased defense spending, Homeland Security spending, and Medicare. As I have always said, the problem was not so much that Bush cut taxes, as that he cut taxes while simultaneously embarking on a hugely expensive war, a massive military buildup, and "compassionate conservatism" in the form of increased Medicare and education spending.

I hope we never again listen to a man who announces a tax cut and a new war in the same speech.
Posted by John at 7:46 PM