The Other Koch Brother 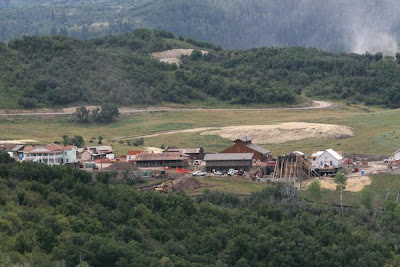 
He paid $2.3 million for a photograph of Billy the Kid at an auction last year. He bought out the Buckskin Joe Western town near Cañon City for $3.1 million in 2010. He owns Jesse James' gun, Wyatt Earp's vest, Sitting Bull's rifle and a flag that belonged to Gen. George Custer. He has more Charles Russell paintings and Frederic Remington bronzes than most museums.

In fact he has so much western stuff that he has decided to build a whole, fake, western town to put it in:


There's a new town in Colorado. It has about 50 buildings, including a saloon, a church, a jail, a firehouse, a livery and a train station. Soon, it will have a mansion on a hill so the town's founder can look down on his creation. But don't expect to move here — or even to visit. This town is billionaire Bill Koch's fascination with the Old West rendered in bricks and mortar. It sits on a 420-acre meadow on his Bear Ranch below the Raggeds Wilderness Area in Gunnison County. It's an unpopulated, faux Western town that might boggle the mind of anyone who ever had a playhouse. Its full-size buildings come with polished brass and carved-mahogany details and are fronted with board sidewalks. . . .

The picture above was taken from a public road, but Koch is trying to get that, too, by trading the government land he owns elsewhere.

As Mat Yglesias says, this scheme is a good argument for progressive taxation.
Posted by John at 8:09 PM