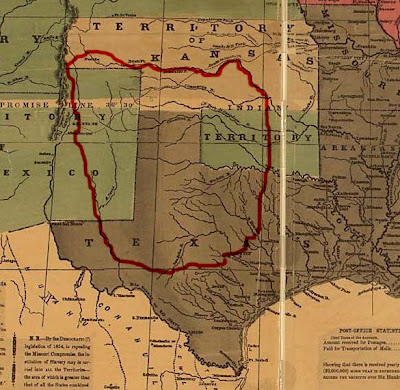 The Comanches were one of America's most fearsome Indian tribes, the horse lords of the southern plains. Their empire, drawn in red on the map above, lasted for more than a century, from the mid 1700s to around 1850, and for much of that time they militarily dominated the European colonies on their borders. 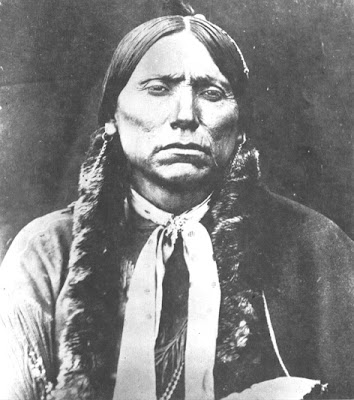 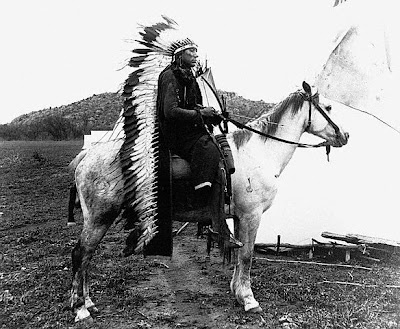 They were great horsemen and fierce warriors. So you imagine them looking like this; this is Quanah Parker, one of their leading war chiefs in their last phase and everyone's idea of a plains warrior. 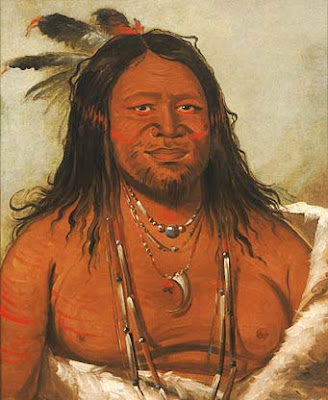 Visitors to Comancheria at its height, from around 1810 to 1840, were therefore shocked to meet leading chiefs who were hugely fat. George Catlin met one, Ta-wah-que-nah, in 1834, and thought he must have weighed at least 300 pounds. He owned 1500 horses, Catlin wrote, but was too fat to ride and instead had to be dragged on a travois. (That's him above.)

I have been reading The Comanche Empire by Pekka Hämäläinen, a prize-winning book that deserves all the praise heaped on it. The part that impressed me the most was Hämäläinen's explanation of how Commanche culture changed at the empire's height, leading to anomalies like obese Indian chiefs.

I always thought of the Comanche as buffalo hunters and therefore as a specialized sort of hunter-gatherer. But the Comanche had huge herds of horses, around 5 horses per person or as many as 150,000 in all. They devoted much more time and resources to breeding, training, and raising horses than they did to hunting, so as Hämäläinen says they are more appropriately seen as pastoralists than hunters. Horse trading was their economic mainstay. On the northern plains, winters were too harsh for horses to reproduce themselves consistently, so more northerly Indians needed a constant inflow of horses from the south. So did American frontiersmen. The Comanche met those needs, trading horses they bred themselves and, even more, horses they stole in Mexico, New Mexico, and Texas. They also traded buffalo robes and meat; in return they got guns, ammunition, metal tools, cloth, and food, especially maize. They fixed the terms of this trade in their favor by force, if necessary, making war on people until they saw the light and accepted the deal the Comanche were offering. So at their height, when they controlled the southern plans and raided wherever they wished across the whole of Mexico, their leaders grew very rich.

As generally happens with warlike pastoralists, Comanche society was highly sexist. Women did all the work around the camp, with help from boys, while the men planned and carried out their raids, traded, and managed the empire. A man with a lot of horses needed many women to do all that work. So the leading Comanches had as many as a dozen wives. They also had female slaves, whom they stole in Mexico. It says something about the society that the difference between junior wives and slaves was small, and men often ended up freeing their slaves and marrying them. 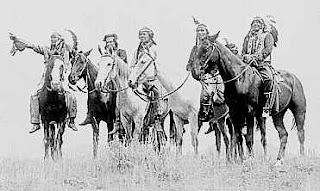 So a Comanche who was a successful raider and trader would accumulate many horses, which would allow him to pay the bride price for many wives, who would have lots of children to do yet more work, and he could lend some of horses to young men who had none in return for a share of whatever they stole, and he would profit from trading as well, and eventually he could acquire so much wealth that he no longer needed to fight or work himself. So he let himself get fat. Whatever prestige he lost by no longer being a leader of raids was balanced by his obvious wealth, and by the network of clients and inlaws he was able to build up, so he was able to assume a leading role in his community and beyond.

This is my favorite kind of history; take a bizarre fact like the fat chiefs of the Comanche, and by explaining it reveal something profound about he society involved.
Posted by John at 9:17 PM