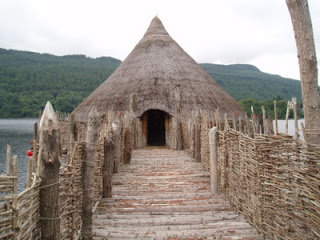 
Researchers have sequenced ancient Irish human genomes for the first time. They discovered mass migrations to Ireland thousands of years ago resulted in huge changes to the ancient Irish genetic make-up. . . .

Researchers studied the genome of a woman farmer who lived 5,200 years ago near what is now Belfast. They also carried out DNA analysis of three men on Rathlin Island from 4,000 years ago in the Bronze Age after metalworking began. The female farmer had an ancestry originating in the Middle East, where agriculture was invented. She had black hair and brown eyes, like current south Europeans. The Bronze Age genomes of the men were different, with about a third of their ancestry coming from ancient sources by the Black Sea in modern-day Ukraine. They had the most common Irish Y chromosome type, the blue eye gene variant. There were also signs that they were lactose tolerant, and suffered from haemochromatosis - excessive iron retention - a disease commonly called the 'Celtic curse'.

The genomes of the woman farmer did not show these - highlighting that the genetic make-up of Irish people had changed dramatically in just 1,000 years.

It's only four people, but it is about the best possible evidence for a migration of Indo-European people into Ireland. This has been a hard problem (here and here) because the archaeology does not show any real breaks between the arrival of Neolithic farmers and the arrival of Christianity. To me the Irish language seemed like pretty conclusive evidence that there was a Celtic invasion, but many archaeologists (and Irish nationalists) rejected this. But as elsewhere in Europe the new genetic evidence is undercutting all theories that Europe's peoples evolved in place.

Abstract to the original article:

The Neolithic and Bronze Age transitions were profound cultural shifts catalyzed in parts of Europe by migrations, first of early farmers from the Near East and then Bronze Age herders from the Pontic Steppe. However, a decades-long, unresolved controversy is whether population change or cultural adoption occurred at the Atlantic edge, within the British Isles. We address this issue by using the first whole genome data from prehistoric Irish individuals. A Neolithic woman (3343–3020 cal BC) from a megalithic burial (10.3× coverage) possessed a genome of predominantly Near Eastern origin. She had some hunter–gatherer ancestry but belonged to a population of large effective size, suggesting a substantial influx of early farmers to the island. Three Bronze Age individuals from Rathlin Island (2026–1534 cal BC), including one high coverage (10.5×) genome, showed substantial Steppe genetic heritage indicating that the European population upheavals of the third millennium manifested all of the way from southern Siberia to the western ocean. This turnover invites the possibility of accompanying introduction of Indo-European, perhaps early Celtic, language. Irish Bronze Age haplotypic similarity is strongest within modern Irish, Scottish, and Welsh populations, and several important genetic variants that today show maximal or very high frequencies in Ireland appear at this horizon. These include those coding for lactase persistence, blue eye color, Y chromosome R1b haplotypes, and the hemochromatosis C282Y allele; to our knowledge, the first detection of a known Mendelian disease variant in prehistory. These findings together suggest the establishment of central attributes of the Irish genome 4,000 y ago.

And a key sentence:


Third, we followed the methods described in Haak et al. (9), which use a collection of outgroup populations, to estimate the mixture proportions of three different sources, Linearbandkeramik (Early Neolithic; 35 ± 6%), Loschbour (WHG; 26 ± 12%), and Yamnaya (39 ± 8%), in the total Irish Bronze Age group. These three approaches give an overlapping estimate of ∼32% Yamnaya ancestry.

Yamnaya is the early Bronze Age culture of the Ukrainian steppes, the possible Indo-European invaders. For an invasive group to make up 32% of the new population is quite a big impact, much greater than that of the Turks in Turkey, the Roman in Gaul, or the Arabs in Egypt.
Posted by John at 6:30 AM