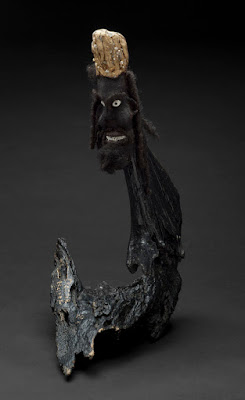 Bessie Harvey (1929-1994) was an African American folk artist. She grew up dirt poor in the Depression, the seventh of thirteen children, was married at 14 to an abusive man and had eleven children of her own. Through Christian faith and her own art she rose above all of this, outliving her tormentors and her troubles:


I am the sculptress that God has taught me to be, allowing me to be, through loving him, believing and trusting in him, knowing that the little girl was put into my mother’s womb so many years ago. My mom told me that I was born with a disease, tuberculosis, and the doctors had told her that I wouldn’t live to get six months old, so, with all the other kids, she just kind of, I thought, didn’t love me. But she told me before she died in ’74, she said,”Bessie Ruth, God is going to bless you,” and she told me that she never got too close to me because she was always afraid of losing me. But see, the Mighty One had already put this there, that I would go through these trials and tribulations, that I would understand today a mother with a lot of children needing somebody to talk to. I would be that one, because I never had that one, and it is a pleasure to reach out to anybody in love, when you haven’t had it yourself. Sometimes it makes us mean, but then, whom God set free, the Son, Jesus, we’re free indeed, and he set me free. I didn’t know how to hate, because he is love, so everything that comes against me, I replaced it with love. 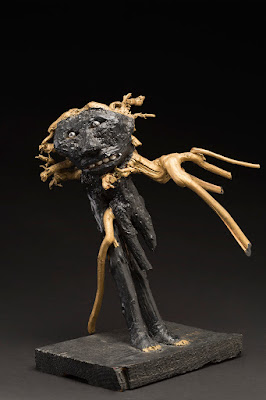 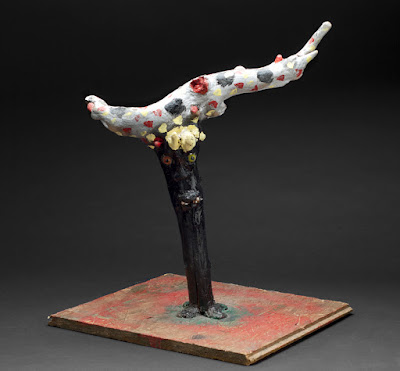 Harvey made most of her works from tree roots. She would go into the woods and find a tangle of roots and stare at them -- "meditating," she sometimes called this -- until figures emerged from the roots and told her about themselves:


And not being able to give it to mankind, I started doing the little people that he allowed me to make, and I could talk to them about my problems, and sometimes I would make one and it would look straight at me, in my eyes, and I would ask it questions like “Who are you? Where did you come from?” It would say “An artist.” I didn’t know nothing about being an artist! I’d never been in an art show, I never even studied art. I’m a fourth-grade graduate, and back in the times that I was going to school, art wasn’t taught, until you were in, I guess, the last years of high school or something like that.

But even when I began to do the sculptures, to me they were my dolls, they were my freedom from this world, that I could go into them, and I could talk to God, and that the spirit would release me from all of the hurt, and I could hear him speak and talk to me. I could see in the eyes of the dolls I could love, sometimes confusion, but I knew that they were there for the purpose of me sharing what I felt with them. And I began to even see them in the walls, in the paneling, and they were all reaching out to me in love, and I began to make more and more and more. I went to work at a hospital here, and I worked there, and I was so thankful to have a job, that I could earn a little money, more than I had ever earned before. And I got there in time for the show that they have at the hospital. They have a little art show every year, and I had a piece that was called Banda. It was a big bird that would fly me away when troubles were so strong that I couldn’t take any more. And I sold Banda, and, oh, boy, I thought I was so rich when I got paid for Banda. And the spirit said to me, “Child, you haven’t seen anything yet.” 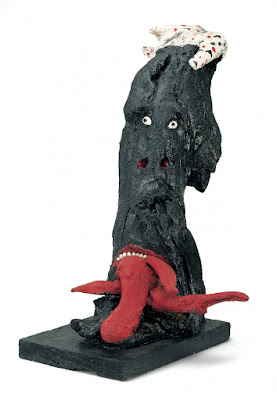 In this same interview, toward the end of her life, Harvey spoke about one of her works, the one above:


There is a piece that’s called The Poison of the Lying Tongues. He speaks of the tongue so much of being a thing that will cause us to go down in great sorrow, because the tongue has never been tamed. He speaks that all animals and everything in the earth has been tamed by mankind except the tongue, and it cannot be tamed,tongues coming out of the lying mouth, and it’s saying to the world today, that the tongue can’t be tamed. So before you use it to say things that will hurt yourself or someone else, remember that love covers a multitude of faults, and it’s a fault to go around hurting others. 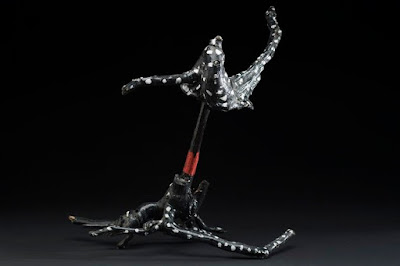 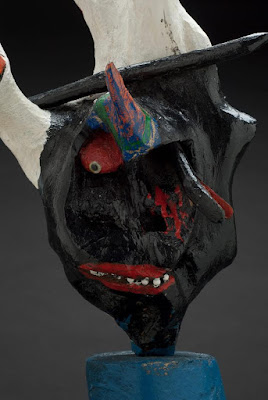 Harvey's story is surely a big part of the appeal of her work to collectors: here is a woman who overcame so much, who found art amidst deprivation without any help from teachers or the art world. It is also an interesting lesson in the anthropology of religion: by and large it is not the rich and successful who find God in a profound way. (Jonah and the Whale, 1987, and Snake Eye, 1989) 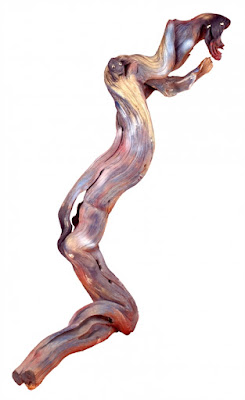 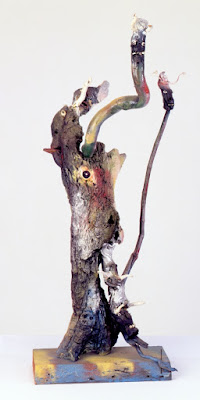 
This is Bessie Harvey, folk artist, so I’m called. I’m really not the artist. God is the artist in my work; nature and insects, they shape my work for me, because they belong to God. I belong to God, and all things belong to God, because it’s in his Word that all things are made to him, that without him there’s not anything made.

I didn't Hear Nobody Pray and The Seven Faces of Eve, both 1987 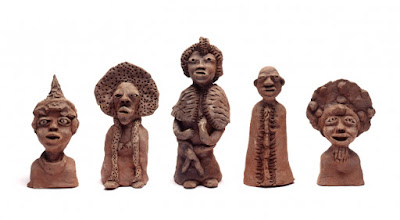 Harvey was also fascinated by Africa, and many of her works evoke African themes. These works inspire in me interest rather than wonder, but put together with Bessie Harvey's life they make an amazing story.  Five Sorcerers, 1986; below, African Woman, 1987 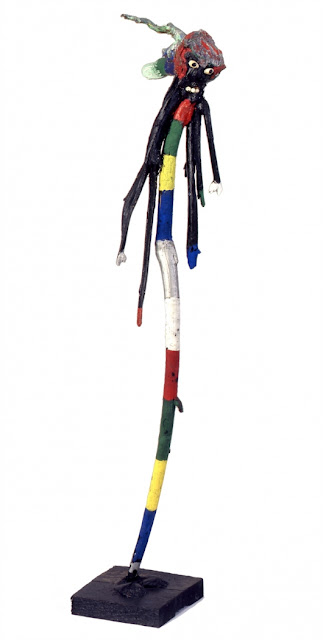