A Climate Deal in Paris 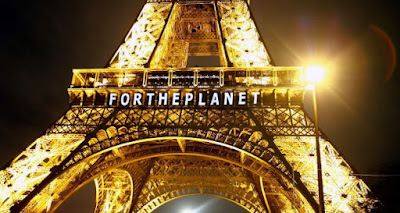 What to make of the Paris Agreement? I really don't know. My instinct is to regard it as meaningless, except as a symbol. The details of the plan strike me as pretty much irrelevant, since nations can flout them at will. But perhaps it indicates an important shift in thinking among the jet-setting world elite, people who do have quite a bit of power. Perhaps the treaty will serve as means of embarrassing politicians and businessmen who try to get on with business as usual in the way of burning coal and clear-cutting forests. Perhaps its simple existence will turn out to mean more than the sums of its provisions.

On the other hand the sight of people whose very way of life (flying around the world from one conference to the next) makes them the greatest per capita producers of greenhouse gases binding the rest of us to produce less raises my populist hackles.

The first world event about which I remember having a strong opinion was the 1975 Helsinki Accords. Since I am by nature something of a cynic and was at that point in the early stages of adolescence, I was utterly scornful of Helsinki. In the treaty the Soviets promised to respects the freedoms of speech and assembly for their citizens. What believer in fairy tales, I thought, would think that they would do so? And yet in the wake of the accords organizations sprang up throughout the Soviet bloc to monitor their governments' compliance with the accords -- Helsinki Watch et al. -- and having just signed the treaty the East Bloc governments were too embarrassed to immediately jail their members. Eventually those groups were all attacked, their members jailed, yet some of them managed to survive in all the way down to 1989, along the way playing a key part in the organization of dissident movements.

The lesson for me was that most people find it very difficult to act in a completely cynical way. Stalins are rare in human history, Kruschevs and Brezhnevs much more common. In general people like to feel that they are acting according to principles, and they can be shamed by pointing out when their actions fall short of their pronouncements.

So perhaps in this sense the big show in Paris will turn out to be meaningful. I continue to believe, though, that technology is key, and that what will cut greenhouse gases in the long run is the spectacular advance in solar power, wind power, batteries, and other key technologies.
Posted by John at 8:05 AM

Sadly, I'll believe it was worth it when the US, China and other leading polluters enact binding laws to support it. Guilt rarely works as opposition to corporate profit.