What do Student Protesters Want? 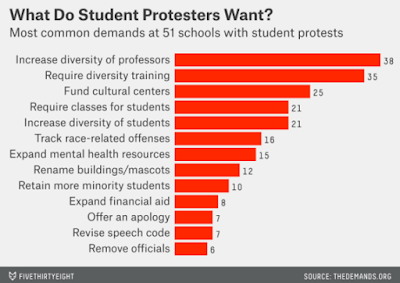 The statisticians at 538 toted up all the demands issued by student protesters at 51 colleges this year, and got the graph above. I find this underwhelming.

Increasing the diversity of professors is hard because professors tend to stay in their jobs for decades, so even the biggest universities hire only a few every year, and in some fields the applicant pool is overwhelmingly white. Diversity training is a waste of time. I don't have any problem with cultural centers, if  that is what students really want. Increasing the diversity of students is hard in the current legal climate, since quotas are pretty much illegal, although the "top 10% of every high school class" rule that the University of Texas came up with is a clever approach. And anyway there are only so many minority students to go around, and some of them go to historically black colleges or other places where they are the majority.

Tracking race-related offenses is a devil-in-the-details problem; track what offenses, as reported by whom? I imagine most colleges already track offenses that result in a formal charge against someone. What others should be considered?

Expanding mental health resources is something every college that can afford it has already been doing, yet another reason why tuition keeps going up and every college has more administrators.

I expect that some colleges will be renaming buildings and changing mascots over the next few years, but this is only going to happen slowly, after administrators have had time to feel out alumni and so on.

I find public apologies for long-past actions to be rituals as bizarre as anything done in New Guinea, but if that's what people want, whatever.

Maybe some college officials need to be removed, but I suspect most of this is scapegoating.

None of this is going to eliminate racism or sexism in America or make college a happier place.
Posted by John at 9:00 AM