The 6,000-Year-Old Death Pit of Bergheim 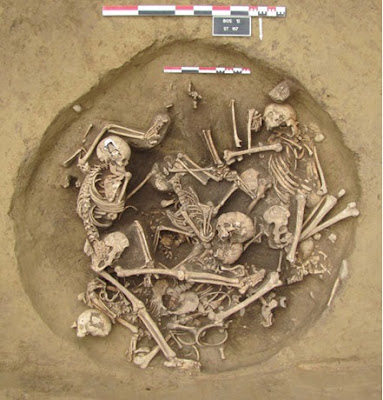 Archaeologists in France have announced the discovery of a burial pit dating to between 4500 and 3500 BCE that held the remains of an mysterious act of violence:


Excavations of a 2-meter-deep circular pit in Bergheim revealed seven human skeletons plus a skull section from an infant strewn atop the remains of seven human arms, say anthropologist Fanny Chenal of Antea Archéologie in Habsheim, France, and her colleagues.

Two men, one woman and four children were killed, probably in a raid or other violent encounter, the researchers report in the December Antiquity. Their bodies were piled in a pit that already contained a collection of left arms hacked off by axes or other sharp implements. Scattered hand bones at the bottom of the pit suggest that hands from the severed limbs had been deliberately cut into pieces.

It’s unclear who the arms belonged to. All the Bergheim skeletons have both their arms except for a man with skull damage caused by violent blows. His skeleton lacks a left arm, the researchers say. They have been unable to determine whether that arm ended up in the pit.

The people of that era buried most of their dead singly, in graves shaped like you would expect graves to be shaped. But there are actually several other "circular burial pits" like this one known from the Neolithic, and they have been interpreted in diverse ways:


Many researchers regard these pits as remnants of storage silos that were put to other uses, possibly as receptacles for the bodies of people deemed unworthy of formal burials.

Others argue that a large proportion of pits were dug as graves for high-ranking individuals, whose servants or relatives were killed to accompany them. Or, slaves might have been killed and put in pits as displays of wealth or as sacrifices to gods.

Of 60 circular pits excavated in Bergheim in 2012 in advance of a construction project, 14 contained human bones. The researchers found skeletons or isolated bones of at least one to five individuals in each of 13 pits. The final pit contained the bodies and limbs described in the new paper.

These archaeologists think the bodies in the circular pit may have been the victims of a raid, and they suggest that


closer inspection of human bones previously found in circular pits elsewhere in Europe will reveal additional instances of violent deaths from a time when armed conflicts occurred between some communities. 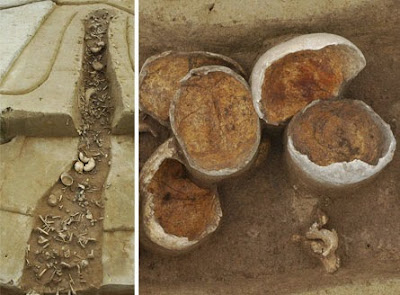 All of this adds to the evidence that the European Neolithic was a violent age. Well before the era of sword-wielding heroes and warriors from the steppes, violence may have been the everyday reality. That the dead from raids were often dumped in circular pits 2-3 meters (6-10 feet) across may even tell us something about the normal scale of the killing. On the other hand there is also evidence, which I have written about here, that Europe was convulsed by great wars a thousand years before the deaths at Bergheim.

The more we learn about the Neolithic, the more interesting it seems.