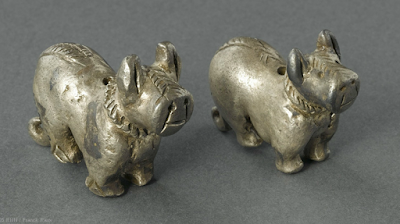 Two wonderful little silver dogs, now in the Louvre. Each is about 1.5 inches (4 cm) long. They come from ancient Bactria, the same region as the composite figures I wrote about last week. The are pierced vertically, to attach them to something, but it is not known what. They date to around 2000 BCE. 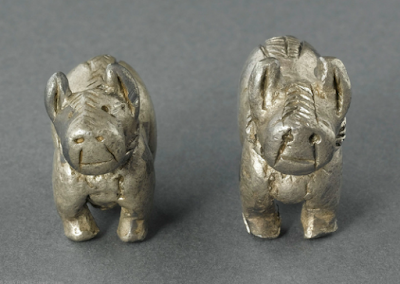 According to the Louvre,


Dogs were domesticated very early and there are many ancient representations of them. Figures of wild dogs animate decorative friezes on vases from Susa dating from the 4th millennium BC. On this site, however, were also found two pendants - one in gold, the other in silver - dating from the late 4th millennium BC and shaped like two small dogs that are apparently domesticated. Indeed, around their neck they wear a hatched collar, just like the two Bactrian figures. Dogs as domestic animals also appear on Mesopotamian objects: for instance, on a terra-cotta plaquette from the early 2nd millennium BC or in the form of statuettes. On the other hand, Bactria has left few representations of this canine companion, preferring the image of a more slender type of dog, either shown running in hunting scenes or watching a flock. The two silver figurines depict in all likelihood another race of dog: smaller, squatter, with a flat, cylindrical muzzle, and plump hindquarters. They have long, rolled up tails, used bizarrely here as stands so that the hind feet do not rest on the ground. 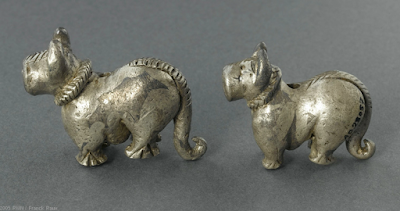