I just finished listening to Emily St. John Mandel's 2014 book, which got a lot of buzz and won some science fiction and literary awards in 2014. It interweaves the lives of a small group of contemporary people with the events that led to the collapse of civilization (a flu pandemic that killed almost everyone) and an account of the world 20 years after the collapse. I very much enjoyed her telling of the apocalypse and what came after but I didn't really love the contemporary parts. The main character there is a star actor, along with his ex-wives and friends, and I am just not very interested in Hollywood. But it is well written and the whole tale held my interest.

I found her account of the post apocalypse world more believable than most I have read. Why do so many people assume that the collapse of civilization would make most people into raging evil monsters? I had to stop watching The Walking Dead because I got tired of everyone being so pointlessly, purposelessly evil. In Station Eleven there is much turmoil and there are some bad people, but most folks are just trying to survive and welcome help wherever they find it. The main focus in that era is on the Traveling Symphony, a few dozen folks who wander the world playing music and putting on Shakespeare, the motto "Survival is Not Sufficient" painted on their caravans. Loved them. 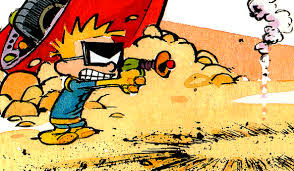 The title comes from a sci-fi graphic novel that one of the contemporary characters was writing when the world ended. This was mildly interesting, but what really struck me was the fictional author's explanation for what she was after: she wanted, she said, to recreate the feeling she got as a child reading the Spaceman Spiff bits from Calvin and Hobbes. I knew immediately what she meant. Bill Waterson gave us a science fiction world sprung straight from a boy's imagination, all wonder and adventure, a rocket ship ride that leaves everything mundane behind. The in-book story of Station Eleven didn't really achieve that for me, and Station Eleven is not that sort of  book at all. It is quieter and more reflective, a novel about adult people rather than a thrill ride. I think I would give it a B+.
Posted by John at 2:31 PM