The Book of Judith in Art and Blood 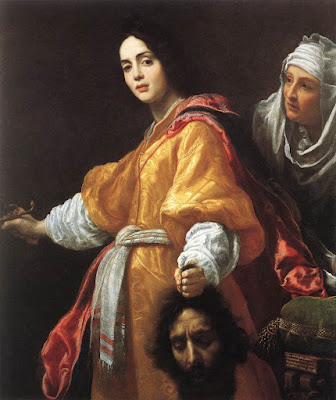 The Book of Judith tells the story of Judith, a brave widow of ancient Israel who saved the town of Bethulia by seducing and then assassinating the commander of an attacking army, named Holofernes. It is part of the Catholic and Orthodox Bibles, but it was never considered a holy text by the Jews; Protestant Bibles put in in the Apocrypha. The story was irresistible to generations of European artists, one of their favorite Old Testament scenes. Above is by Cristafano Allori, Judith with the Head of Holofernes, 1613. 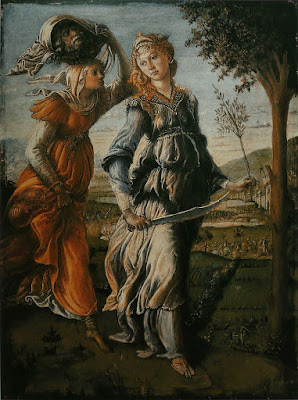 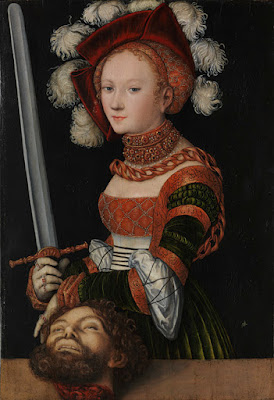 The story survives in two versions. The Greek text, which seems to be older, sets the tale in Assyrian times; the Hebrew version, of which the earliest surviving texts are medieval, places it in the time of the Maccabean Revolt. It is the Greek text that appears in Christian Bibles, so that is the one I follow here. (Lucas Cranach the Elder, Judith with the Head of Holofernes, c. 1530). 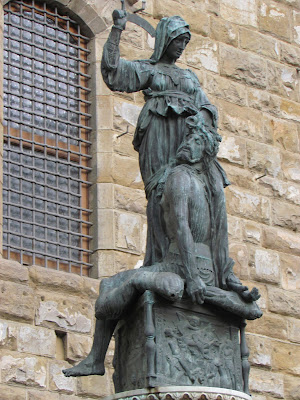 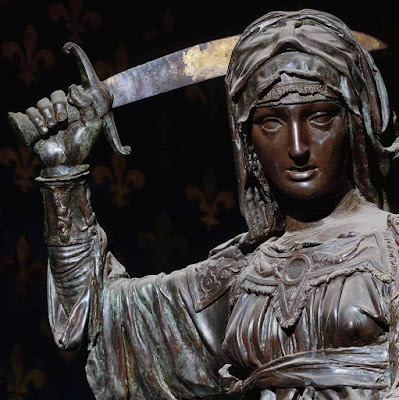 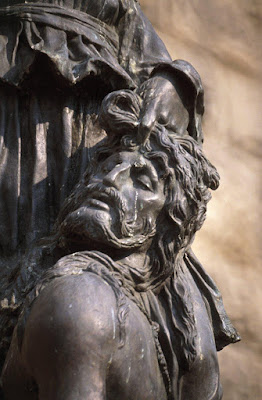 According to the text, the Assyrians had invaded Israel and laid waste to much of it when they besieged Bethulia. Seeing little hope, the town's ruler told the invaders that if no relief arrived in five days, they would surrender the town. Hearing this, Judith went before him and said the people should trust in the Lord:


Let us ask the Lord with tears, that according to his will so he would shew his mercy to us: that as our heart is troubled by their pride, so also we may glorify in our humility. 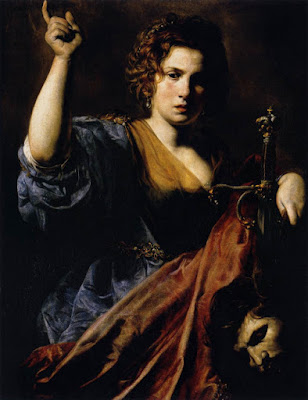 Judith went off by herself and prayed:


Bring to pass, O Lord, that his pride may be cut off with his own sword. Let him be caught in the net of his own eyes, and do thou strike him by the graces of the words of my lips. Give me constancy in my mind, that I may despise him: and fortitude that I may overthrow him. For this will be a glorious monument for thy name, when he shall fall by the hand of a woman. For thy power, O Lord, is not in a multitude, nor is thy pleasure in the strength of horses, nor from the beginning have the proud been acceptable to thee: but the prayer of the humble and the meek hath always pleased thee.

Then Judith arrayed herself in finery and left the town, letting herself be captured by the Assyrians and telling them she had come to betray her people to Holofernes.


And when she was come into his presence, forthwith Holofernes was caught by his eyes. And his officers said to him: Who can despise the people of the Hebrews, who have such beautiful women, that we should not think it worth our while for their sakes to fight against them? And Judith seeing Holofernes sitting under a canopy, which was woven of purple and gold, with emeralds and precious stones. After she had looked on his face, bowed down to him, prostrating herself to the ground. And the servants of Holofernes lifted her up, by the command of their master. 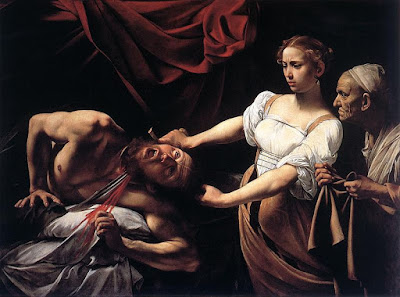 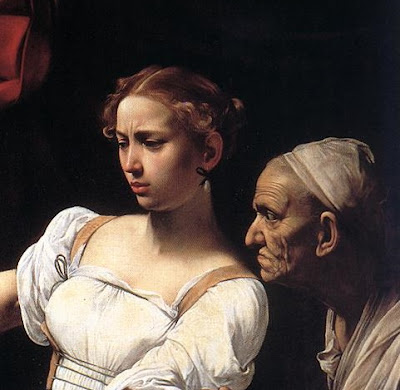 Holofernes received her happily into his household, and let her leave his tents every day to pray in the hills.


And it came to pass on the fourth day, that Holofernes made a supper for his servants, and said to Vagao his eunuch: Go, and persuade that Hebrew woman, to consent of her own accord to dwell with me. Then Vagao went in to Judith, and said: Let not my good maid be afraid to go in to my lord, that she may be honoured before his face, that she may eat with him and drink wine and be merry. And Judith answered him: Who am I, that I should gainsay my lord? All that shall be good and best before his eyes, I will do. And whatsoever shall please him, that shall be best to me all the days of my life. And she arose and dressed herself out with her garments, and going in she stood before his face. And the heart of Holofernes was smitten, for he was burning with the desire of her. And Holofernes said to her: Drink now, and sit down and be merry; for thou hast found favour before me. And Judith said: I will drink my lord, because my life is magnified this day above all my days. And she took and ate and drank before him what her maid had prepared for her. And Holofernes was made merry on her occasion, and drank exceeding much wine, so much as he had never drunk in his life. 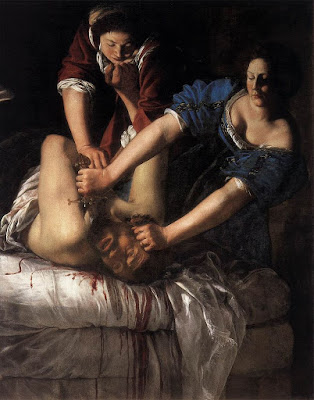 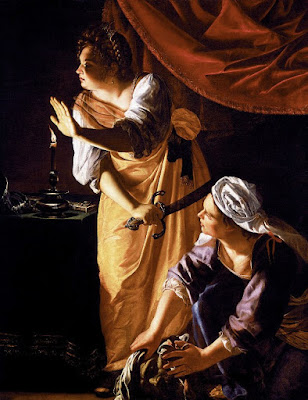 And when it was grown late, his servants made haste to their lodgings, and Vagao shut the chamber doors, and went his way. And they were all overcharged with wine. And Judith was alone in the chamber. But Holofernes lay on his bed, fast asleep, being exceedingly drunk. And Judith spoke to her maid to stand without before the chamber, and to watch. And Judith stood before the bed praying with tears, and the motion of her lips in silence, saying: Strengthen me, O Lord God of Israel, and in this hour look on the works of my hands, that as thou hast promised, thou mayst raise up Jerusalem thy city: and that I may bring to pass that which I have purposed, having a belief that it might be done by thee. And when she had said this, she went to the pillar that was at his bed’s head, and loosed his sword that hung tied upon it. And when she had drawn it out, she took him by the hair of his head, and said: Strengthen me, O Lord God, at this hour. And she struck twice upon his neck, and cut off his head, and took off his canopy from the pillars, and rolled away his headless body. And after a while she went out, and delivered the head of Holofernes to her maid, and bade her put it into her bag.

Two paintings by Artemisia Gentileschi, Judith Beheading Holofernes, 1611, and Judith and Maidservant with the Head of Holofernes, 1625. 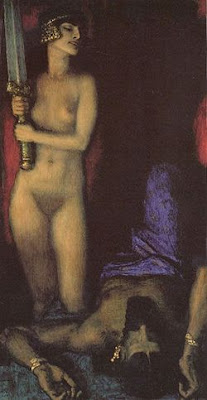 Judith returned to Bethulia told the people what had happened. The Israelites sallied forth and attacked the Assyrians. Finding their commander dead, they were afraid and confused, and the broke and fled. 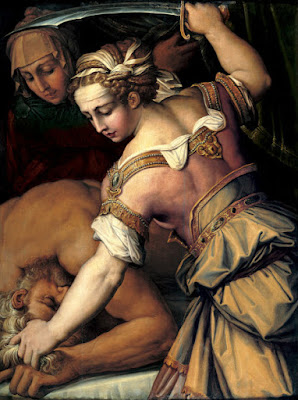 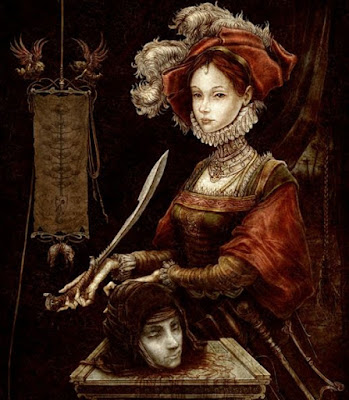 And one contemporary work, Judith, by Keith Thompson. 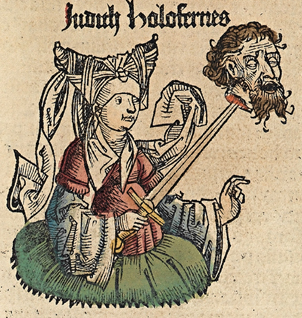