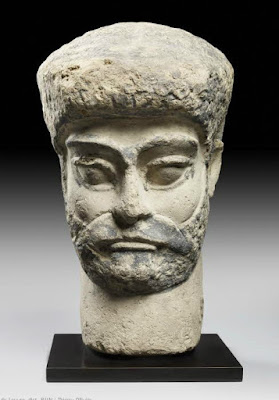 Elam was a just east of Mesopotamia in what is now the southwestern corner of Iran, at times spreading into modern Iraq. A civilization arose there in parallel with Sumer, perhaps at first lagging a few decades behind but generally at the same level. The Elamites endured as a distinct people down into the days of the Persian Empire, which used Elamite as one of its official languages, and they are mentioned in Hellenistic and Sassanian times as well; they seem to have lost their identity before the Islamic conquest. (Clay portrait head from Susa, life-sized, c. 1500 BCE) 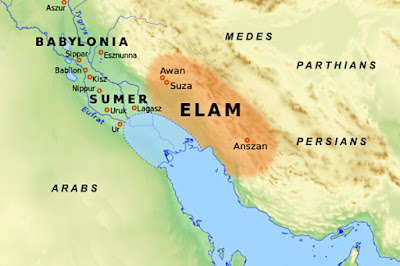 The first Elamite city was Susa, and it remained their main center for most of their existence. Nice map above, which I got from a web page about Biblical prophecy on which people were trying to figure out how what the Lord said to Jeremiah about Elam applies to modern Iran:


I will break the bow of Elam, the mainstay of their might. I will bring against Elam the four winds from the four quarters of heaven; I will scatter them to the four winds, and there will not be a nation where Elam’s exiles do not go. . . . Yet I will restore the fortunes of Elam in days to come.

Much of the early archaeology of Elam was done by the French, and as a result the Louvre has an amazing collection of Elamite artifacts. 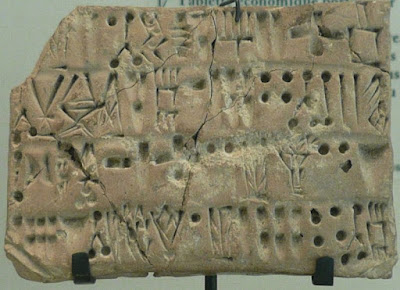 The Elamite language came to be written with a derivative of Mesopotamian cuneiform, but like Sumerian it seems to be unique, with no living relatives. Because the language is unique and there are not that many texts, it is only partially understood. 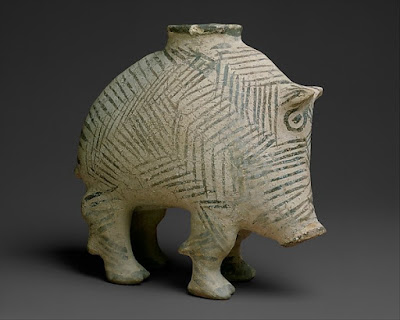 The period from 3100 to 2900 BCE is called proto-Elamite. This lovely little boar vase dates to around that time. 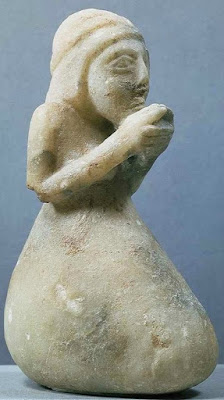 As does this figurine of a female worshiper. 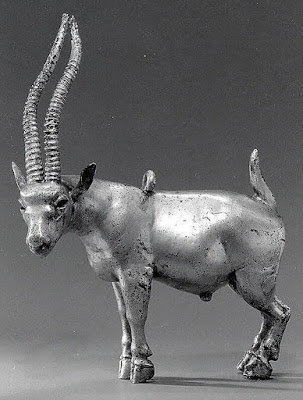 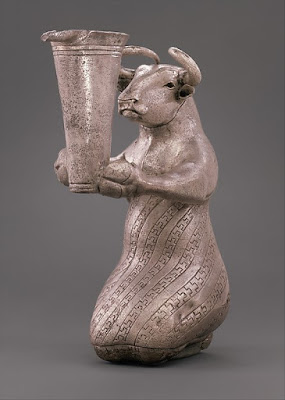 The date of these silver artifacts is disputed. They were all looted, so are without good contexts. Some people say they are proto-Elamite, some say they date to later. Love the cow. 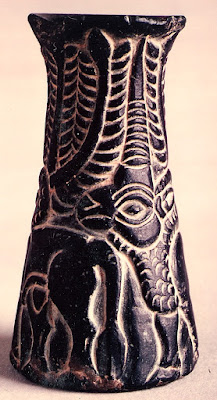 In the third millennium BCE the most recognizable Elamite artifacts are vases carved of chlorite. Many have been found in Mesopotamia, but the stone definitely comes from Elam and most experts think all of these vases were carved there. 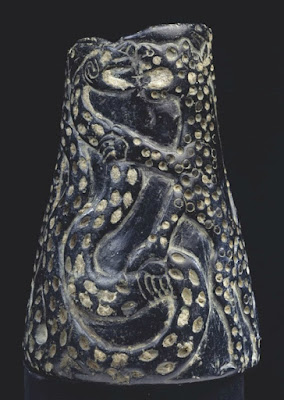 This one depicts a leopard battling a snake, which the Louvre says is a common Elamite motif, although I can't remember ever seeing it before. 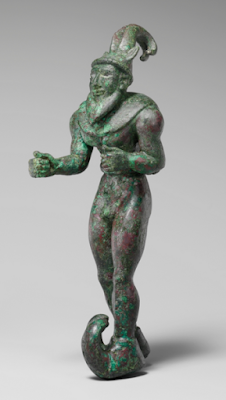 This is one of my favorite Elamite works, known as the Striding Horned Figure. It is generally interpreted as a demon or divine messenger. 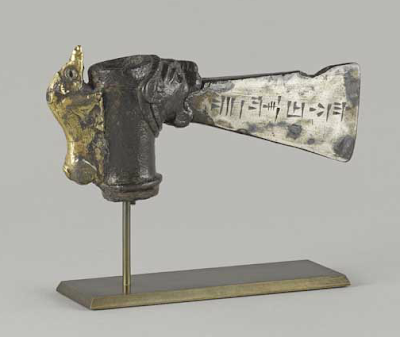 Around 2000 BCE the kings of Elam were quite powerful and established a significant empire, battling the Babylonians as equals. This small ax is inscribed with the name of King Untash-Napirisha, who dedicated it to the goddesses Ishnikarab and Kiririsha. It was found in Tchoga Zanbil, which was a special religious settlement built outside Susa in the late third millennium BCE. The ax probably dates to the early second millennium. It was most likely taken from a defeated enemy so is not really Elamite, but on the other hand it was then inscribed in Elamite and placed in an Elamite temple, so good enough for me. 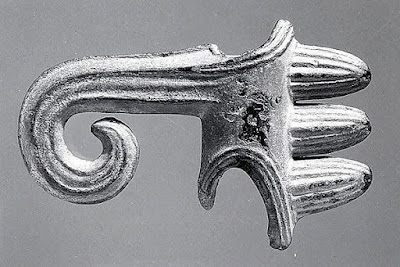 This, on the other hand, is an actual Elamite ax head. 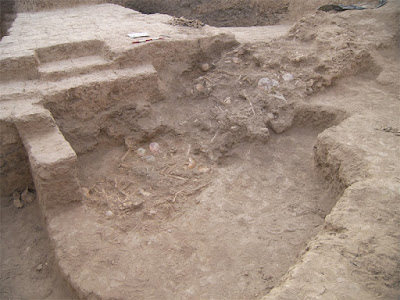 Archaeologists working in Tchoga Zanbil, now known as Haft Tappeh, recently uncovered evidence of a massacre that took place around 1300 BCE, "several hundred" skeletons piled into the space behind the town wall. 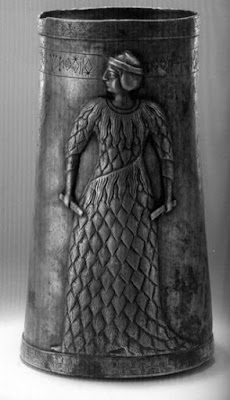 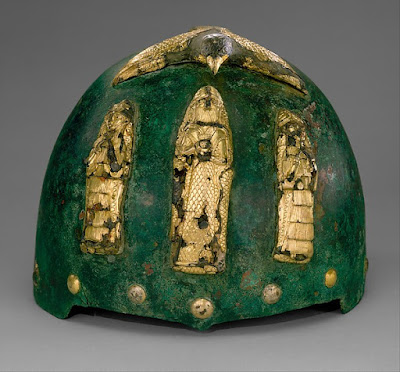 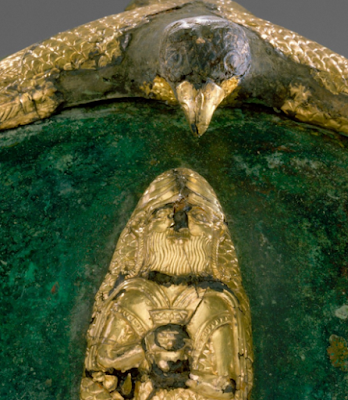 Some of the most famous Elamite art dates to the Middle Elamite period, around 1500 to 1100 BCE. That includes this helmet carved of bitumen (solid tar) and decorated with gold foil. This is in the Met, where I just saw it this week. 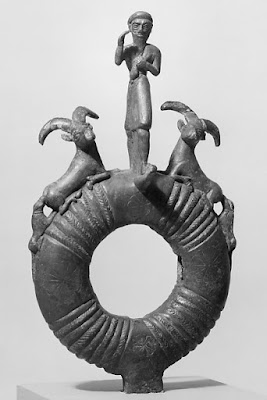 Standard. Notice the dogs gnawing on the goats, who don't seem to care. 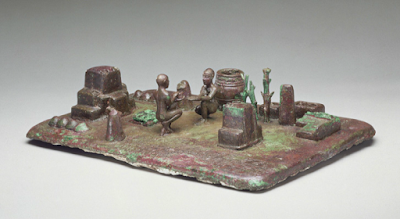 This bronze slab is known as the Sit Shamshi. It depicts two naked men carrying out a religious rite. The Louvre describes it thus:


Two nude figures squat on the bronze slab, one knee bent to the ground. One of the figures holds out open hands to his companion who prepares to pour the contents of a lipped vase onto them. The scene takes place in a stylized urban landscape, with reduced-scale architectural features: a tiered tower or ziggurat flanked with pillars, a temple on a high terrace. There is also a large jar resembling the ceramic pithoi decorated with rope motifs that were used to store water and liquid foodstuffs. An arched stele stands by some rectangular basins. Rows of dots in relief may represent solid foodstuffs on altars, and jagged sticks represent trees. The men's bodies are delicately modeled, their faces clean-shaven, and their shaved heads speckled with the shadow of the hair. Their facial expression is serene, their eyes open, the hint of a smile on their lips. An inscription tells us the name of the piece's royal dedicator and its meaning in part: "I Shilhak-Inshushinak, son of Shutruk-Nahhunte, beloved servant of Inshushinak, king of Anshan and Susa [...], I made a bronze sunrise." 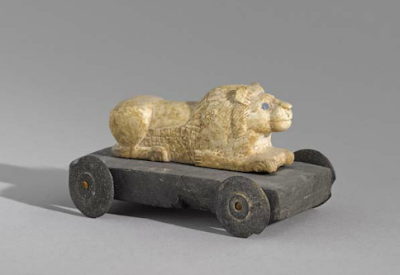 This wheeled Lion is part of a whole cache of such objects found at Susa. Nobody knows if they are sacred objects or toys. Or perhaps both, like dreidels. 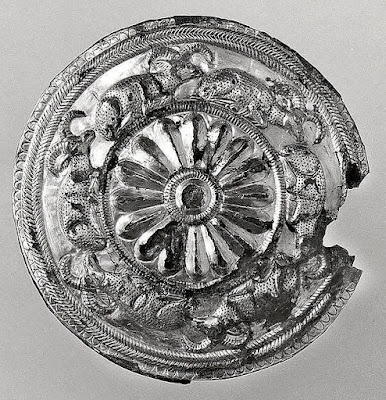 Circular ornament carved of bitumen and decorated with silver foil. 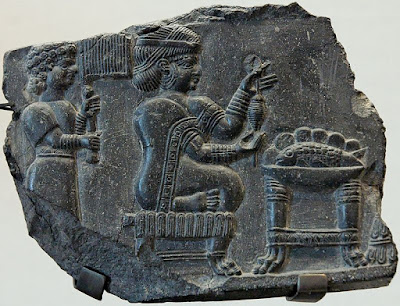 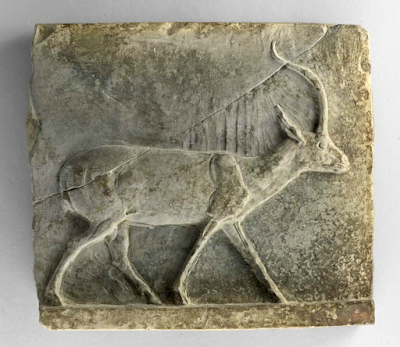 And finally a couple of objects from the Neo Elamite period in the first millennium BCE, when Elam was part of the Assyrian, Babylonian and Persian Empires. Above, famous relief carving known as The Spinner, and a relief of a gazelle.
Posted by John at 6:59 AM