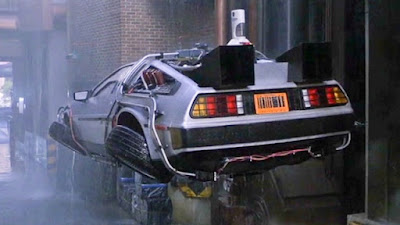 Back to the Future Day -- 10/21/2015 -- was the day to which Marty McFly was catapulted into the future in 1985's Back to the Future II. In the original, McFly went back to 1955, and the whole movie was basically about how much America had changed in those 30 years. Thinking about this Ross Douthat was inspired to ponder how little has changed between 1985 and now, compared to the 30 years before that:


The power of the first Back to the Future depended not just on an arbitrary 30-year period, that is, but on how radically America had changed across those decades: Marty’s adolescence and his parents’ courtship lay on opposite sides of (among many other things) rock ’n’ roll, civil rights, Vietnam, the sexual revolution, drug culture, the moon landing, feminism, the apocalyptic ’70s, and, finally, the conservative turn of the Reagan years.

Of course the future projected in Back to the Future II was full of flying cars and flying skateboards and other cool future stuff.

Douthat thinks this means that cultural change has slowed to a crawl:


In the original Back to the Future, Marty McFly invaded his father’s sleep dressed as “Darth Vader from the planet Vulcan.” Thirty years later, the biggest blockbuster of 2015 promises to be about . . . Darth Vader’s grandchildren. It will be directed by a filmmaker who’s coming off rebooting . . . Star Trek. And the wider cinematic landscape is defined by . . . the recycling of comic-book properties developed between the 1940s and the 1970s.

I wonder about this a lot, and we have discussed it here before. Has the personal computer, internet, smartphone revolution really been no big deal? Or has it been, in its way, as profound as anything that happened between 1955 and 1985, or between 1925 and 1955, or between 1895 and 1925? I tend to think that recent changes have not been particularly impressive, and that most of life's basics -- how we work and where we live and what we eat and so on -- have changed very little over the course of my adult life. Thoughts?
Posted by John at 9:09 PM

One thought that occurs to me is that perhaps "the sixties" and all we associate with that were exceptional. In the half century or so before 1960 the United States had undergone enormous, unprecedented, so to speak, infrastructural change: from rural to urban to suburban, from agricultural to manufacturing to the beginnings of a post-industrial economy, from relative non-involvement to active global dominance, and from a joke to a behemoth of a federal government--among other changes. Yet all through that period the US could be said to have remained oddly conservative in cultural matters. Then there was an explosion of cultural change, and perhaps the biggest cultural change of all was that there was an increasing openness to cultural change--which means an abatement of the kind of explosiveness Douthat is talking about.

Between 1985 and 2015, the Berlin Wall fell, the USSR disbanded, the EU was formed, AIDS went from a death sentence to a manageable chronic disease, the Middle East was plunged into chaos that is still ongoing, Rock and Roll finished dying and was replaced, street gangs went from omnipresent to operating underground, drug culture did much the same, the internet and all its countless ramifications arose, globalism began to take serious root, economics become substantially digital, the "Long Peace" continued to almost double its length, solar and wind power began to mature...

There's plenty more to list, but the simple answer is that no - cultural change hasn't slowed. And no, the new Star Wars film isn't really evidence otherwise.

Was the popularity of Superman or Batman in the 70s and 80s somehow a sign that culture hadn't meaningfully progressed since the 40s? No, of course not - no more than the fact that Santa Claus is still around could be seen as a sign that we're still living like we did in the 1800s.

It's funny the things we take for granted about the present day.

In 1985, it cost you a small fortune to speak to someone on the other side of the country via telephone, while today it costs nothing extra compared to regular calls. Before if you wanted to know an unfamiliar word you had to pick up a dictionary and hope it contained the entry, but today you type it into a screen and presto. Libraries went from literal card catalogs to digital indexes. Our cars are safer and better performing than ever. Our entertainment is higher fidelity and available on demand.

We can perform basic translations of foreign text simply by entering it into our computers. When we see something that makes us laugh, we can share it with someone on the other side of the planet instantly. We have cameras and telephones in our pockets at all times. We all walk around today with futuristic money, paying with virtual cash that exists only in cyberspace, accessed via a handy little datachip. If we get lost, we can use a pocket device to send signals to a series of geo-stationary satellites to ask us where we are on the planet with accuracies of a few feet.

Things are plenty different. The mistake people make is in assuming that as technology and culture change, so will people. Humanity doesn't change - at least not anywhere near so quickly. For all our technological and cultural advancements, we're fundamentally no different than the ancients were. We just know more and are better able to shape the world around us, and are perhaps a small bit wiser.

Actually, I think that my (largely unsupervised, cellphone free) childhood and my children's (largely scheduled) childhoods are, and continue to be, radically different. Today, I have three children without Smartphones--and they are alone in this amongst all (I believe it is now ALL) their friends. Even my 11 year old.

There was not a "playdate" concept when I was young. Now--my kids' elementary school schedules were such that there wasn't time to invite friends over after school.

It is HARD WORK to carve out unscheduled time for your 8 year old with that sort of a schedule.

Daycare--I recall that daycare was a communist plot, largely practiced by Israelis, Cubans, and Russians to the end of indoctrinating children outside the familial home. Now--well, that's certainly not our cultural idea about daycare nowadays.