Americans routinely tell pollsters that while things are ok in their neck of the woods, the rest of the country is going to hell. E.g., my local school is good, but American education is a disaster. Congress is awful, but I like my own Congressman. 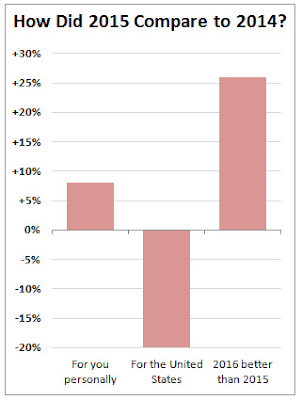 What could be behind this, except for the media? The relentless attention of mass shootings, terrorists, refugees, and so on, things that directly affect only a handful of people? The relentless negativity of presidential candidates and other newshogs?

When it comes to their own  lives, people can judge for themselves how things are going. But nobody has any personal sense of life across a vast nation of 300 million. For that, we rely on the media and our leaders, and for various reasons they prefer to accentuate the negative. Pessimism and anxiety are the result.
Posted by John at 11:59 AM

According to the AP's article on the poll, Americans were not so keen on 2015 for themselves, either.