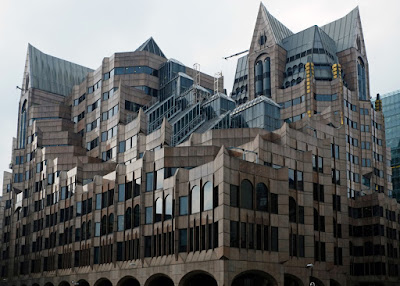 This photograph has been making the rounds of art blogs, under the wrong name, and it took me a while to figure out that it is really part of Minster Court in London. This office complex was designed by GMW Partnership and completed in 1991. 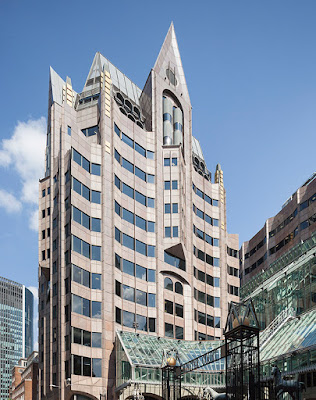 I love these buildings; in fact this is a good example of what I would like to see more of in contemporary architecture. I loathe spare modernism but I don't really expect architects to put up slavishly neo-gothic or neo-classical buildings like we did in the Victorian era. But I do want them to do something to make the buildings interesting, especially as they are lived at the human scale. 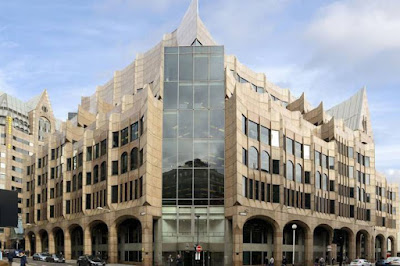 Of course, since I like it, most architecture critics hate it:


The Independent described it as ‘one of the great walking nightmares of postmodern architecture, an aftershock that rose like Dracula’s castle from the ashes of the recession.’ According to the Guardian it looks ‘as close to Batman as the Middle Ages’ and Simon Bradley sees it as a ‘vast and bewildering American influenced flagrantly populist pile of peaks and gables’. The film 101 Dalmatians gave it the backhanded complement of use as the headquarters of Cruella De Ville. The City Guides architectural expert, Paul Taylor, feels that it is a rather dishonest building, as its fantastical complexity is achieved by appearing to stick on features that serve no practical and little symbolic purpose.

And here is what I hate about contemporary architecture and its critics: what is wrong with making an office building "flagrantly populist"? Why shouldn't people like the buildings they work and live in? Why should people be forced to endure, day in and day out, various sculptural experiments with form because that is what architects admire? Architecture is not like painting or chamber music, something created and consumed by small groups of insiders. It is a mass art for the mass of the people. And, damn it, architects should strive to create buildings that the people who see them every day will enjoy. 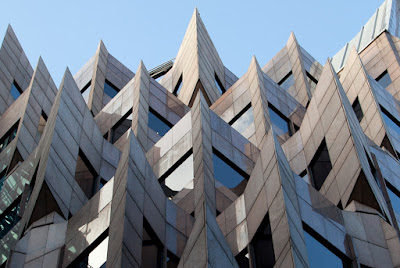 Plus, who cares if decorative details are "dishonest" or serve no practical purpose? They're pretty and make life more pleasant. That is justification enough, as far as I am concerned. 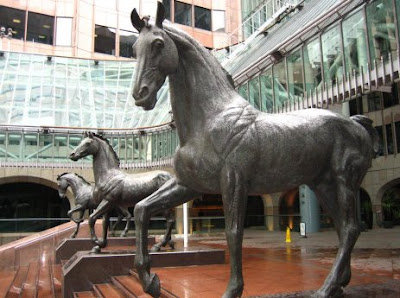 The main entrance is adorned with Althea Wynne’s statues of three large horses, meant to evoke the horses on  the facade of St Mark’s Cathedral in Venice. Lovely. 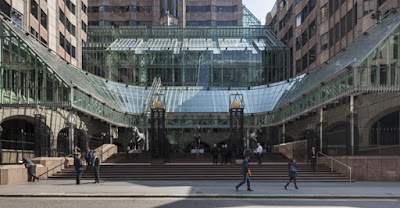 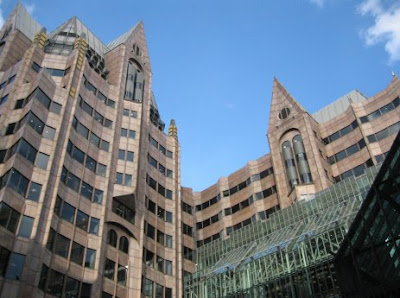 So to heck with critics who can't stand pretty building that ordinary people like. More interesting, pretty buildings, please.
Posted by John at 8:05 PM

I'm also not certain how it's supposed to be "flagrantly populist". It looks expensively impractical, which is something the general populace would be highly unlikely to support if their taxes were going toward the construction, and which they'd find repulsive and ostentatious in a privately financed endeavor. It also stands out like a sore thumb compared to the predominant architecture of London, which again probably isn't something the average person on the street wants.

I also think you're fundamentally misunderstanding the culture of architecture. You call it mass art for the mass of the people, and suggest it doesn't have much in common with more elite mediums like painting and chamber music, but that strikes me as completely backwards.

Architecture is the endeavor of the rich, designed solely to suit their tastes, with little to no regard for the masses except to avoid arousing too much real ire. Ask yourself, who can afford to design and construct such buildings but the wealthy elite? How can an artistic medium which requires such massive expenditures possibly belong to the masses? The poor live and work in simple, practical buildings. It's the rich who promote lavish decoration and massive constructions like this.

This is why I've always been utterly perplexed by your tastes in architecture. Despite your constant refrain that we should build structures that the average person will find beautiful and can appreciate, it seems you hate the sorts of buildings that the masses would actually build for themselves, and simultaneously champion those styles which are most emblematic of the frivolous excesses of the wealthy elite.

You frequently post to share your admiration for gilded palaces, sprawling manor houses, and the government buildings of old Imperialist states. The buildings you champion are the products of the richest elites of history, designed and built to either conform to courtly fashions (the better to secure one's position among the other elites, particularly if one is newly elevated into that status), or to serve purely as ostentatious self-aggrandizements (the better to push one's dynastic or political prestige even higher). The architecture you seem to best love is the structural equivalent of a bunch of rich snobs patting themselves and each other on the backs, and comparing the sizes of their bank accounts.

If this particular building is "flagrantly populist", it's only from the viewpoints of the poor-despising rich, who see anything which isn't sufficiently exclusionary and emblematic of their elite status as being worthy of disdain. Likely this building seems to the establishment too much like something the "nouveau riche" would build, not displaying the appropriate "elite approved" tastes and sensibilities.

Minster Court is very popular with the people who work there, and it shows up all the time in advertisements and so on.

Most people in both the U.S. and Britain much prefer highly decorated old buildings to stark modernism. Most people hate brutal concrete architecture in particular. This is not in dispute; Prince Charles' people have documented it in Britain over and over again. The only dispute is whether architects ought to pay any attention to what most people want. Architects almost all answer no; they think they should respond to the demands of art and engineering and only to those. It is true, as you say, that architecture is mainly sponsored by the very rich, through corporate boards and museum boards and so on. So in practice it is a chamber music sort of art. But it should not be. As the old tag has it, "What touches all should be approved by all."

It's easy to say we should have "beautiful buildings", but hard to agree on what constitutes beauty in a building. Taste is of course highly subjective. I'm not certain one can actually argue that "most people hate brutal concrete achitecture", and even if it proved true, what are the alternatives?

Even when agreement can be achieved, there's still all the practical concerns to deal with. Buildings cost a lot of money - money which the poor either do not have, or are loathe to spend. A community sponsored building paid for with taxpayer money is never going to get approval to spend many millions extra on decorative elements.

Of course, cheaper decorative options are still available, and often do wonders to improve more inexpensively built edifices. There's a lot to be said for the potential of good painting, lighting, and effective usage of space. There's absolutely no need to emulate the absurd aesthetics of the oppulently wasteful and extravagant when trying to create an attractive building. You can quite effectively marry pleasing aesthetics and utility together with only a modicum of effort and cost.

But the point is in many ways moot - the people who pay for the buildings are the ones who decide how they look. Unless you want to somehow force them to concede to the desires of the majority (How would one do that? How would one even gauge what the majority wants?), they're going to continue to build what they want for themselves.

And in a way, don't they have that right? These buildings are, after all, private property. If taxpayer money was involved, perhaps there'd be an argument for requiring the building to appeal to the majority's desires (or a vague approximation thereof), but that isn't the case here.

"What touches all should be approved by all" is almost impossible to achieve fairly. Nothing ever achieves unanimous approval. And aside from that, there's also the tyranny of the masses to consider. If you believe that the architecture of a private edifice must conform to majority tastes, then you likewise have to side with every snobby homeowner's association that enforces absurd rules of conformity. It's simply impossible to please everyone, and even just pleasing most people comes with terrible strings attached.

The only fair way to handle the issue is to simply do what we do already - let whoever is paying for the building design it however they want it to look. If you don't like it? Tough! That's the price of being allowed to have your own buildings look how you prefer instead.

Either we allow everyone to build how they want to, or we quash individuality and enforce conformity. I don't see any other possible options, much less feasible ones.