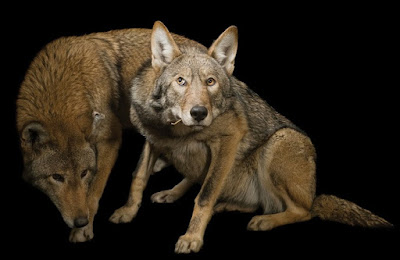 Biologists are still arguing vociferously over whether the red wolf is a separate species (Canis rufus) or a hybrid of gray wolves and coyotes. This matters because right now the red wolf is an officially endangered species, with attendant protections. Anti-wolf activists in North Carolina have seized on new genetic research, which supports the hybrid model, to argue that the red wolf is not a species and therefore they can shoot all they want.

But Charles Darwin already gave the scientific answer to this and all related questions back in 1859:


I look at the term species as one arbitrarily given for the sake of convenience to a set of individuals closely resembling each other.

Ever since then taxonomists have been trying to somehow save the concept of species from Darwin's Nominalism, but none of their definitions really stands up.

So far as I can see, biology has pretty much nothing to say about whether or not red wolves are a species. There is some evidence one might consider, such as that red wolves would rather breed with other red wolves than with coyotes, but nothing truly definitive. In terms of the Endangered Species Act, the question is a political one. Personally I like red wolves and would like them to stay around, but I wouldn't presume to say this is based on really good science.

It still mystifies me that so many biologists and paleontologists remain obsessed with defining species, given that they all believe in evolution, which teaches that in the long run there is really no such thing.
Posted by John at 11:42 AM

Wait, people want to shoot these endangered red wolves, and their basis for doing so is to argue that they aren't a "species" and therefor they can be driven to extinction without qualms?

Based on that logic, killing off rare albino animals is just hunky dory, because they're not a "species" either.

"No, it's okay! I can totally kill off the last of these rare and unique animals, because there will still be all these other non-rare members of their species to take their place! The species will continue just fine without them!"

This is the sort of thinking that my dark and bitter side wants to see turned on the hunters themselves. Humanity as a species will do just fine without them, so why shouldn't we just call open season on these individuals? Let's see a few big game hunters randomly sniped in the head out of the blue and then propped up for a grisly photo op before being mounted on their killer's wall! Nothing better than a bit of "sporting" like that, eh?