What We're Sending to Europa 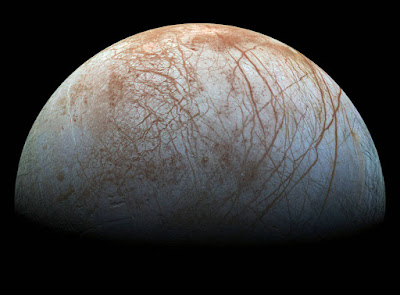 NASA has announced the instruments it plans to send to study Jupiter's moon Europa when it launches a spacecraft in that direction in the early 2020s. Like Saturn's moons Enceladus and Titan, Europa seems to have an enormous ocean sealed under its icy crust, kept warm by tidal forces. The instruments are:

The idea behind most of these instruments is that if Europa is regularly ejecting plumes of water into space, we can study the composition of its ocean by sampling those plumes, without having to drill through miles of ice. Two approaches are planned: to study gases released by the plumes as they dissipate into space, by flying through them; and to examine the surface hoping that deposits have been left there by the plumes. The fantasy would be finding organic molecules in the plumes that point toward life under the surface. But even if the ocean is sterile, it is still an alien ocean of unknown chemistry, so knowing what is in it would be cool.
Posted by John at 6:59 AM