Cubist Orientalism and a New Record Price for Art 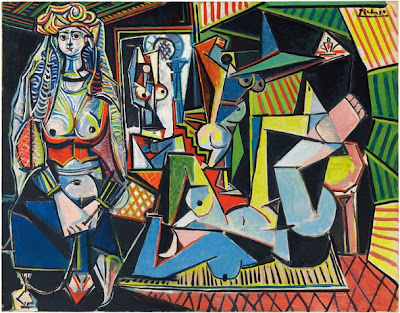 Picasso's Les Femmes d'Alger (Version O) sold yesterday for $179.4 million, a new record for any work of art sold at auction. The identity of the buyer has not yet been revealed. At least I like this better than the previous record-holder, an awful thing by Francis Bacon.

But doesn't it resurrect the discredited male gaze?
Posted by John at 7:23 AM

Are art prices climbing in response to the rich getting richer? Or is this more a case of inflation causing the numbers to be bigger before adjustment?

Most likely purchaser is in Mainland China.

They have been deeply invested in Western art, to the point of buying themselves slots in at least one bienniale to promote-- get this!-- an artist from some obscure place *not* in China.