The Ever-Increasing Efficiency of Solar Panels 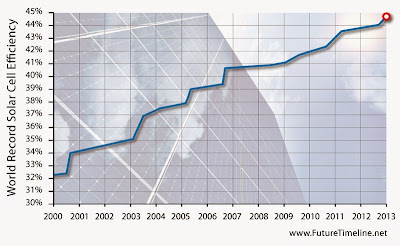 One of the reasons that solar power is getting cheaper every year is that solar panels keep getting more efficient. The efficiency of a solar panel is the percentage of the solar energy falling on it that it converts to electricity. You can see from this graph that over the past 15 years the efficiency of the best cells has risen from 32% to 45%. The really interesting thing about those numbers is that back in the 80s when I was studying physics you could read that the maximum theoretically possible efficiency for a solar cell was about 27%. 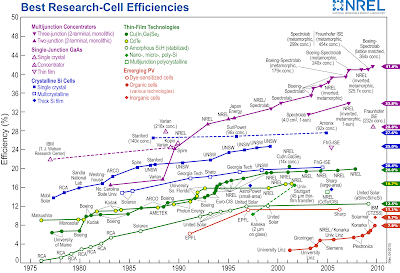 But human cleverness has found ways to boost yield beyond that limit, using multiple junction arrays and concentrator systems and other techniques. For more detail on various records through 2010, click on the graph above.

As of right now most of this is not very relevant to the commercial solar industry, which relies on single layer silicon cells with an efficiency of about 20%. But I think it is important to realize that the potential for much improved yields is there. As we get ever better at manufacturing complex chips made with alloys like gallium arsenide, the price of these high-end systems will fall.

Another technology with great future potential is thin film technology, which allows functioning solar arrays to be made on paper-thin, flexible sheets that could be used in all sorts of ways. Cells that automatically adjust themselves to take maximum advantage of current conditions are also in the works. Solar is a new, rapidly developing technology, and it will keep getting better fast.
Posted by John at 6:45 AM