Loki's Castle and a Missing Link between Bacteria and Us 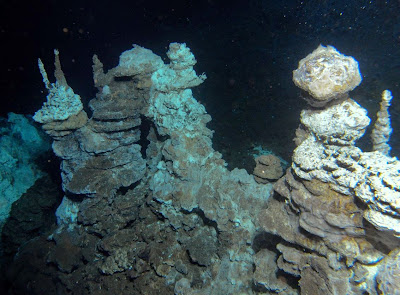 All complex living things are eukaryotes, that is, our cells have many internal parts such as a nucleus, mitochondria, and so on. The bacteria from which we evolved, and the even more primitive Archaea, lack such organs. The evolution of the eukaryotic cell was one of the most important events in the history of life on earth, but it is one for which we have precious little evidence. All modern organisms are either eukaryotes or not, with no intermediate forms.

Until now. Working with a soil sample taken from the bottom of the Atlantic Ocean, near a hydrothermal vent known as Loki's Castle, a team of Swedish and Norwegian biologists may have found one:


On Wednesday, a team of scientists announced the discovery of just such a transitional form. . . .

It turned out that the sediment contained DNA from a lineage of archaea unlike any previously found. The scientists dubbed it Lokiarchaeum.

Analyzing the DNA, the researchers found that Lokiarchaeum is far more closely related to eukaryotes than any other known species of archaea. But even more surprising was that it had genes for many traits only found before in eukaryotes. Among these genes were many that build special compartments inside eukaryote cells. Inside these compartments, called lysosomes, eukaryote cells can destroy defective proteins. All eukaryotes also share a cellular skeleton that they constantly build and tear down to change their shape. Dr. Ettema and his colleagues found many genes in Lokiarchaeum that encode the proteins required to build the skeleton.

So this may be a truly transitional form between simple bacteria and archaea and us -- another missing link found. But one should caution that nobody has yet seen a Lokiarchaeum, and while it seems likely that it uses these genes for the same purpose as more complex cells -- the basic cellular processes like respiration and photosynthesis have changed very little since they first evolved, and the same goes for the genes that encode them -- that is not certain.

Still, what an amazing discovery. And another gap in the record of life's history filled in, and therefore another piece of evidence for evolution.
Posted by John at 7:51 AM