The Hand in the Wolf's Mouth, Norse and Celtic 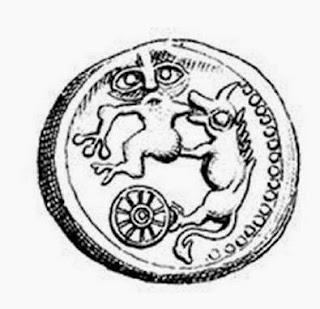 This Celtic coin comes from northern France and likely dates to around 100 BCE. It was published back in 1892, but I never saw it until today. 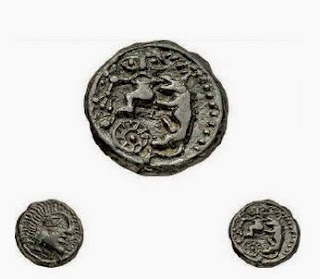 It obviously depicts the story we know from the 13th-century Icelandic version as the Binding of Fenrir. The gods tricked the monstrous wolf into holding still while they tied him down with a magical rope made by the dwarves; as pledge of their good faith the god Tyr held his hand in the wolf's mouth. When the wolf realized that he had been tricked, he bit off Tyr's hand. But he was bound to a rock called Scream (Gjöll) and was fated to lie there until Ragnarok, when he would break loose and kill Odin before being slain in turn by Odin's son.

The wheel is a sun sign, and may allude to the role of wolves in the Norse stories about the sun and the moon; according to our Icelandic sources, the sun and moon were always moving because they were chased by wolves across the sky. When wolves finally caught and ate the heavenly lights, Ragnarok would begin.

But what is it doing on a Celtic coin? The story does not appear in any Celtic source. But then most of the Celtic sources are Irish, and perhaps Gallic druids picked it up form Germans they met on the Rhine. Or perhaps it is a very ancient Indo-European story, once widely known in Europe, that either never made it to Ireland or was omitted from the stories the monks happened to write down. Certainly the coin shows that the story was at least 1300 years old when Snorri Sturluson made it part of the Younger Edda. 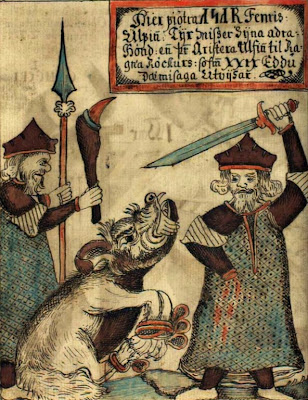 I am excited by this find. I have been reading about Indo-European myth for 30 years, and I sometimes feel like I already know all the sources, but this new discovery makes me think that there must be hundreds of other little clues buried in old archaeological reports and the dusty publications of local antiquarian societies and the like. The truth is out there.
Posted by John at 7:14 AM