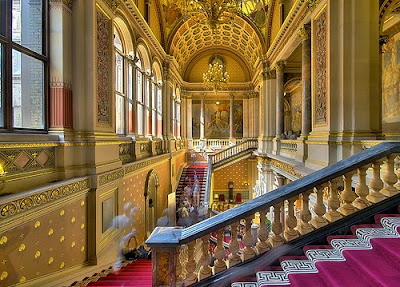 One of the grandest of Victorian Buildings, radiating the confidence of empire. Built 1861-1868. The chief architect was George Gilbert Scott, but it was Lord Palmerston, the Prime Minister, who insisted on Palladian style rather than the Gothic Scott preferred. Still in use by the government, the building is generally closed to the public, but there is an annual open house. 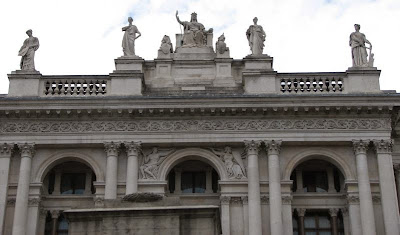 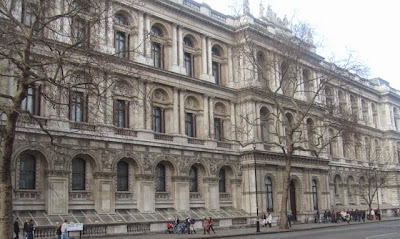 The exterior is dignified but rather drab, and most people walk by without suspecting the wonders concealed within. 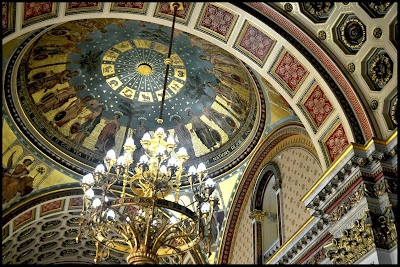 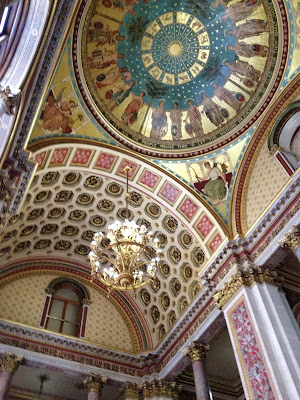 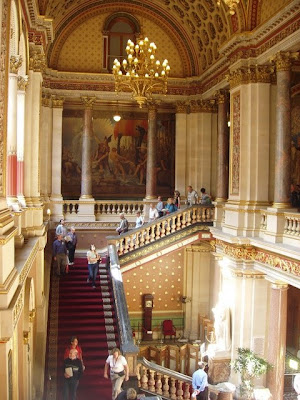 Top and above, grand entrance hall. 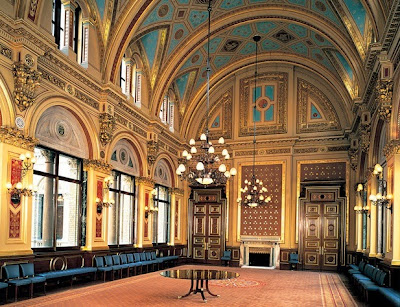 The Locarno Suite, which Scott envisioned as the "drawing room of the nation." 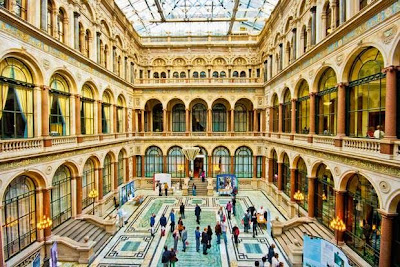 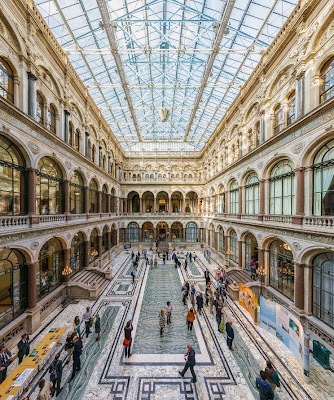 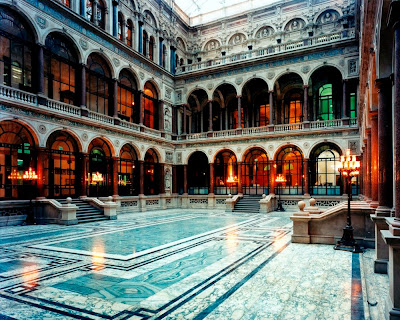 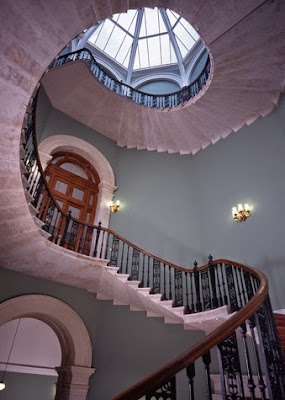 Other rooms. Why did we lose the ability to build such spaces? Was the ambition to create them tied too closely to the drive for empire, so we lost them both together? Could a democracy with modest ambitions in the world aspire to such architectural grandeur?

Another post inspired by Unseen London, photographs by Peter Dazeley with text by Mark Daly.
Posted by John at 8:17 PM

I just think we're not as willing to spend as much money on architecture as we were in the age when Empires were swimming in loot taken in conquest.

Who, in the modern world, would pay for a building like this? Lapis in the floors, turquoise in the ceilings, gilt everything, massively inefficient usage of space, particularly in the vertical element... Who other than rich private individuals are both willing and able to pay for such extravagance? Where do you expect to find spaces remotely like this except in the palaces and mansions of the exclusive elite?

Certainly no modern government could today get away with spending taxpayer money on such absurdly lavish luxuries. But during the height of Imperial Britain, people gloried in ostentatious displays of the nation's dominance over her "lesser" subjugated peoples - particularly when the gold and precious stone was paid for (or perhaps even directly supplied) via plunder.

Architecture tells you what a person, or a people, admires and values. To a society all too willing to trample over and exploit others, building their Foreign and Commonwealth Office to be a giant glorification of such abuses makes perfect sense. If you justify the brutal domination of foreign cultures for your own gains with notions of your own inherent supremacy and the pursuit of glory, naturally you are drawn to things which you believe symbolize that glory and supremacy.

Why build government offices in such an extravagant manner? Because it displays that you CAN - that you are better than everyone else, because they aren't so fabulously wealthy and powerful that they can plaster an office building in filthy lucre without cringing at the cost. It's the same underlying reason the ultra rich buy diamond encrusted wristwatches, drink gold-flake filled beverages, and own garages full of sports cars they never drive. It's a way of lying to yourself, telling yourself you're somehow "better" than other people because you have wasteful luxuries while others starve in the streets.

So if the death of Empire means the death of the arcitecture that glorifies Empire, I for one will shed no tears.