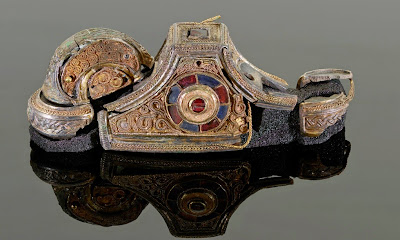 The Staffordshire Hoard is an astonishing trove of Anglo-Saxon metalwork, full of beauty. But most of it was hacked to pieces before it went into the ground -- it looks like the fruits of looting the battlefield after a mighty clash in which one side was completely slaughtered. Instead of taking whole swords or helmets, the victors just cut off the jeweled bits and stuffed them in bags. British conservators working with those fragments have started to figure out how some of the bits went together. Above is a sword pommel, newly reassembled from several pieces; below is the decorative band from a helmet. 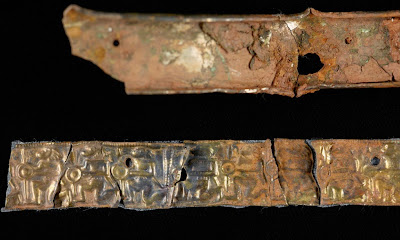 As to why these marvelous weapons were hacked apart, that remains mysterious. After all, an intact sword with a jeweled pommel would have been worth much more than the damaged pieces of the pommel in isolation. Two possibilities present themselves: either the victorious army was itself on the run from some even larger force and had to travel light, or the loot had been dedicated to God and the monks who were to be the immediate recipients wanted no weapons to violate their holy shrine.
Posted by John at 7:49 AM

To be fair, there are many reasons to travel light besides specifically being on the run from a foe.

It could just as easily be the shattered remnants of the enemy who is fleeing, and catching them before they can regroup elsewhere might be a priority. Or the opposing army might have split into pieces before the fight, and the victory only wiped out one portion of a larger force, the others of which still need to be dealt with elsewhere nearby.

That said, it seems like it would cost you more time to break off jewels from an army's worth of weapons than you'd gain back by saving on weight, even marching across long distances. Based purely on that notion, I'd suspect more of a ritual motivation than a practical one - although, again, I can think of other reasons that religious proscriptions against payment in weaponry.