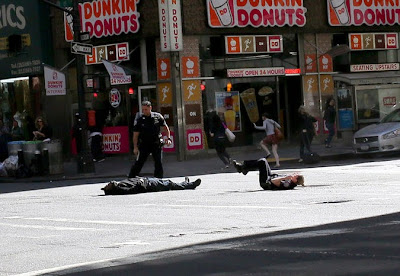 In Manhattan Wednesday morning, a man was shot by the police while wielding a hammer. Two eye witnesses came to the Times with stories of the event -- one said the man had been fleeing from the cops when he was shot, the other that he was already handcuffed when he was shot. But then the police released film of the whole event, captured by a surveillance camera, which revealed that both of the eye witnesses were wrong. The man was clearly still pursuing one officer with his hammer when the other shot him; he was not handcuffed until after he was shot and was lying on the pavement. You can watch the video at the Times and see how quickly the whole event  unfolded and how easy it would be for a bystander to misunderstand what happened.

The spread of video cameras throughout our world has already had profound effects on our society, notably the declining reputation of the police, and it will continue to do so. It may also have big effects on how we understand our own minds, since we may now regularly be confronted by recordings that show how false our memories can be.
Posted by John at 7:08 AM